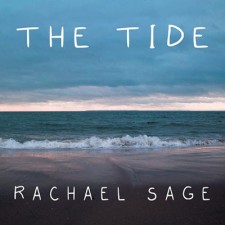 Fresh off the heels of a lengthy tour of both the US and Europe supporting her 2016 full-length album Choreographic, Sage returns to her folk roots with this collection of timely protest songs. The Tide began with a desire to find universal threads of compassion in response to tragedy. The release includes topical subject matter related to the Orlando shooting, Elie Wiesel’s passing, the Syrian refugee crisis and the controversial 2016 US Presidential election. Sage states:

“Like so many of my artist peers, each of these intense and often overwhelming situations sparked so many emotions and crystallized my need to respond musically in a more traditional, folk-driven way. At their essence, these are protest songs I wish I hadn’t had to write.”

Never one to shy away from social commentary, inspiration came to Sage in often unexpected forms, such as the July 2016 death of Elie Weisel (Holocaust survivor, writer, humanitarian, Nobel Laureate). She saw an online image of him helping refugees and quickly thereafter, the song “The Tide” was born, which distills the theme of compassion into freedom from oppression, whatever the source.

“Disarm Distrust” attempts to make sense of the senseless hate that fueled the Orlando Pulse shooting, while “Tomorrow", co-written by guitarist James Mastro (Patti Smith, Ian Hunter), is a shamelessly acerbic response to the results of the Presidential election and was composed in a London hotel room while on tour.

A slowed-down, mournful version of “Try Try Try”, a track from her prior release Choreographic, rounds out the EP, which Sage hopes will “leave the listener calmed, soothed but also questioning everything. This is the time for us to be listening hard to our own inner voices, so we can act as thoughtfully and positively as possible moving forward.”

Sage will be touring this Spring and will have the EP available on CD at her shows. February and March, she joins blues rocker Beth Hart for East Coast dates and shortly afterwards heads to the UK for a tour supporting synth-pop pioneer Howard Jones.

GET THE TIDE ON iTUNES​​  #TheTideEP

"The Carole King of her generation"
--Blurt Magazine

"A leap forward in elegance and emotional power"
--iTunes Editorial

ABOUT RACHAEL SAGE: With 9.5 million YouTube views and 12 full-length albums, Rachael Sage is one of the busiest touring artists in independent music, performing 100+ dates a year both solo and with her band, The Sequins. She has earned a loyal following for her dynamic piano playing, delicate guitar work, soulful vocals, and improvisational audience interaction. Sage has shared the stage with Ani DiFranco, Jamie Cullum, Eric Burdon, Marc Cohn and Shawn Colvin. She's received numerous songwriting awards including The John Lennon Songwriting Contest (Grand Prize) and several Independent Music Awards. Her songs have appeared on MTV, HBO, A&E, TLC, Comedy Central, the Fame soundtrack, and Lifetime TV's hit reality series Dance Moms. Sage has also been an outspoken advocate against bullying, releasing a benefit EP in 2016 for anti-bullying charity Ditch The Label and giving workshops at schools combining musical improvisation, dance and storytelling.