The Foundation for a Drug-Free World launched its annual Community Crusaders Awards at the Church of Scientology Buffalo to honor Western New York's leaders in the fight against drug abuse. 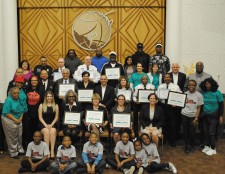 Buffalo, New York, April 25, 2017 (Newswire.com) - The Buffalo Chapter of Foundation for a Drug-Free World marked World Health Day with its first annual Community Crusaders Awards ceremony April 17 at the Church of Scientology Buffalo. The award acknowledges the work of those who raise awareness of the danger of drugs in the face of the drug abuse epidemic plaguing the Buffalo metropolitan area.

According to the Erie County Medical Examiner's Office, opioid abuse is suspected or known to have caused the deaths of 129 people in the first 109 days of 2017.

"We thank the Church of Scientology for bringing this awareness to the forefront and allowing this law enforcement agency to share in the process of saving and improving lives."

Those presented Community Crusaders Awards are leading voices of drug prevention for the region: Avi and Julie Israel of Save the Michaels of the World, Inc.; Colleen Babcock of Horizons Health; Jessica Hutchings, director of the Face 2 Face drug education program of Kids Escaping Drugs, Inc.; the Buffalo Special Police represented by Chief Ted Hampton; educator Debra Sevillian-Poles; Sharon Tell, president of Team of Hope; and Pastor James Giles and Murray Holman of the Peacemakers’ Stop the Violence Coalition.

In accepting their award on behalf of their organization, Peacemakers organizer Pastor James Giles and Stop the Violence Coalition President Murray Holman described drug abuse as one of the most important domestic issues in the country. They pointed out that the problem doesn’t begin with children on the streets but in the home, and drug education is essential in tackling the issue.

Face 2 Face’s Jessica Hutchings said, “If we don’t come together as a community every day to fight this epidemic, we are going to continue to lose our kids, our parents, our brothers and sisters.” She acknowledged her fellow awardees and the Foundation for a Drug-Free World. “If we didn’t have partnership through all these different organizations, we wouldn’t be able to do what we do.”

“Drug abuse has no borders and no boundaries,” said Buffalo Special Police Chief Ted Hampton. “We will spread the message of Drug-Free World because we understand that if we can prevent drug use, especially in young people, we can prevent future crimes. We thank the Church of Scientology for bringing this awareness to the forefront and allowing this law enforcement agency to share in the process of saving and improving lives.”

The Foundation for a Drug-Free World is a nonprofit public benefit corporation that empowers youth and adults with factual information about drugs so they can make informed decisions and live drug-free. At the heart of this program are 14 printed booklets on commonly abused drugs, each accompanied by a public service announcement concerning that drug, and a feature-length documentary. Along with the educator’s curriculum, these materials augment any drug abuse prevention program run in the community, whether through law enforcement, schools or community programs.

The Church and its members are dedicated to eradicating drug abuse through education and invite the participation of all who share the goal of a drug-free world. In looking into the decline of society in the late 1970s, Scientology Founder L. Ron Hubbard wrote, “Research has demonstrated that the single most destructive element present in our current culture is drugs.”

The Church of Scientology and Scientologists support the Foundation’s Truth About Drugs program, whose award-winning educational materials are translated into 17 languages and used in 190 countries and territories.