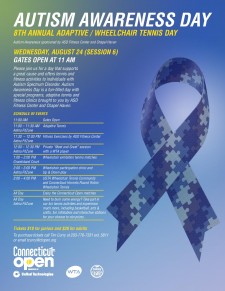 Orange, CT, August 22, 2016 (Newswire.com) - ​Autism Spectrum Disorder Fitness Center in Orange, Conn., is partnering with the Connecticut Open tennis tournament to sponsor Autism Awareness Day on Wednesday, August 24th. The event will be held at the Connecticut Tennis Center at Yale University.  One feature of this event will be exhibitions of adaptive tennis and adaptive fitness activities – which means the physical activities have been altered to meet the needs of individuals with autism spectrum disorders (ASD).  Another feature of the Awareness Day will be a special location where parents and children can safely watch the tournament without many of the sensory distractions that trouble many individuals on the autism spectrum.

The ASD Fitness Center is the first of its kind to cater exclusively to individuals on the autism spectrum, regardless of their age.  When children receive an ASD diagnosis, they face lifelong challenges that vary widely in both intensity and severity. Oftentimes persons on the autism spectrum are unable to live independently once they reach adulthood.  Physical fitness has been shown to help manage and even improve many ASD symptoms.

ASD Fitness Center provides not only services at the fitness center that enhance skills for the clients (with ASD), but they have events for the clients' parents. They've created a sense of community.

Based upon government data, the demand for the services the fitness center provides far exceeds the geographic reach of Southern Connecticut. According to the 2015 National Health Interview Survey, 1 in 45 children have been diagnosed with ASD. These numbers are based on interviews with parents. Meanwhile the Centers for Disease Control and Prevention (CDC) place the figure at 1 in 68.  CDC’s numbers are based on medical and school records of 8-year-old children at monitoring sites.  ASD diagnoses are increasing in the U.S., regardless of the government statistic cited.

Tori-Anne Dauria’s son, Alexander Stambouldis, is 6 years old and was diagnosed with ASD at age 3. Born very pre-maturely at 25.5 weeks of gestation, Alex is what his mother calls her miracle child.

Alex has both autism and sensory issues, and he also lives with the lasting effects of a brain bleed he experienced at or shortly after birth. He has attended the ASD  since it opened two years ago.

Just putting his two hands together, kicking a ball, or using eating utensils are difficult tasks for Alex. Attending the fitness center is helping Alex and giving him a better life, according to his mother.

“The fitness center was the first activity since mommy and me where Alex has had to be independent,” Ms. Dauria said. She says through the individualized coaching he receives from the fitness center’s coaches, all of whom are trained specifically to work with people who have ASD, Alex has become more fluid with language. He’s developed from using picture prompts to listening to and understanding commands. At first he was able to do a one-two command, now he is up to 4 plus commands.

Mrs. Dauria explained that one of the key things parents of children with ASD experience is a sense of isolation. Their children don’t develop at the same rate as their peers, and behavioral issues are common. Thus, many parents find it difficult to find activities for their ASD children to participate in with others who are more similar.

“They provide not only services at the fitness center that enhance skills for the clients (with ASD), but they have events for the clients’ parents.  They’ve created a sense of community.  If not for the fitness center, Alex would not have been able to go meet Santa,” Mrs. Dauria stated. “You think your child can’t get to play sports on a team.  But on the weekends they have events.  We’re not so isolated.  It’s opened up a whole new world for us.”

Michelle Rivelli is a pediatrician and the mother of Jessica Zangrillo, age 21.  Jessica was diagnosed with ASD at 2-and-a-half years old.  Dr. Rivelli said Jessica is a twin, but she didn’t play and communicate when she was a child in the same manner as her sibling.

Although Jessica is a fairly active person, her mother said that Jessica has problems with body awareness and has a little bit of low muscle tone.

“Going to the fitness center has helped improve these problems and helped with other leisure activities,” Dr. Rivelli said.  “As Jessica has gotten older, it makes her happier to participate in leisure activities in the community.” Her work at the ASD  has improved her participation in yoga, personal training and social group activities. The fitness center’s peer mentor programs help Jessica and other clients with their social skills and the ability to form relationships.

Dr. Rivelli said that Jessie has participated in a lot of activities since her ASD diagnosis, and very few have been as attentive to detail and well-organized as the ASD.

Adam and Dedra Leapley, who are parents of an adult child with ASD, founded the fitness center in 2014.  Mr. Leapley, believing in an overall healthy mind and body, introduced his son to personal training several years ago. This step led to improvements in his son’s level of fitness and social/emotional well-being.

Mr. Leapley also recognized his son’s talent for mentoring others on the spectrum through his work with programs and organizations such as Unified Sports, Best Buddies, and the Autism Spectrum Resource Center.  Mr. Leapley said he thought that a specialized fitness center would give his son the opportunity to translate his strength for working with others into a career.

After floating the fitness center concept to professionals in the field of ASD, the Leapleys discovered there was a great enthusiasm for the idea and decided to move forward with building the facility about two years ago.  Recently, ASD Fitness Center has teamed up with the Yale Child Study Center. Frederick Shic, PhD, an assistant professor at the Yale Child Study Center, and his colleagues are conducting a formal study of the impact ASD Fitness Center has on its members. The study will measure how fitness is helping individuals on the spectrum and will explore how technologies, such as video games, eye tracking, robotics, and virtual reality tools, can be used to maximize these benefits. For more information on the creation of this one-of-a-kind facility, and the foundation which provides scholarships to this fitness center, watch this short video:

Below is the link to purchase tickets for the Connecticut Open event: