Recent release "Cold World War" from Newman Springs Publishing authors Marie Bravo and Raul Jimenez is the story of a sergeant in the army, a Vietnam War veteran who re-enlists during the Cold War to be stationed in Germany, where many of the civil rights injustices facing America at that time are still felt through the American soldiers. 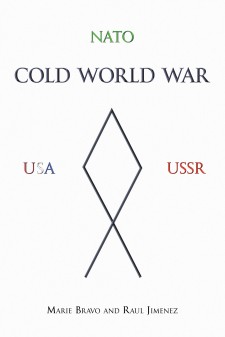 NEW YORK, September 29, 2020 (Newswire.com) - Marie Bravo and Raul Jimenez have completed their new book “Cold World War”: a gripping and potent semi-biographical story of Sergeant Bravo, a Mexican American soldier and grandfather of one of the book’s authors, stationed in Germany during the Cold War.

“In 1972, the Soviet Union was known as the USSR and consisted of fifteen Soviet republics. East Germany was a satellite state of the USSR, allowing easy access to carry out their main objective, which was to undermine the USA’s presence in West Germany. They wanted America to leave Germany and to dissolve NATO. They wanted to create bad morale among the US soldiers. This was Russia’s main attempt to undermine the United States military’s presence in Europe.”

Published by Newman Springs Publishing, Marie Bravo and Raul Jimenez’s historical tale follows Sergeant Bravo, a Vietnam War veteran who decided to re-enlist in the army to serve as a sergeant in Germany during the Cold War. Serving in the army during the Cold War was much different than serving in the Vietnam War. In Vietnam, Sergeant Bravo faced combat on a regular basis. In Germany, on the other hand, there is little outright violence or warfare, and most of the soldiers around him had never faced combat. As a result, Sergeant Bravo’s propensity for being in combat mode frequently gets him into trouble.

As a Mexican American living at the height of the civil rights movement, Sergeant Bravo faced discrimination akin to that of African Americans at the time, even after the Civil Rights Act passed in 1964. These prejudicial attitudes carried over to Germany, where soldiers in the army would cause problems with Sergeant Bravo. Sergeant Bravo must overcome these significant barriers to succeed as a low-ranking sergeant in the Cold War. Sergeant Bravo ends up providing invaluable assistance to the NATO community during the Cold War and opens the military’s eyes towards the systematic problem of race relations that extends beyond the borders of the United States.

Readers who wish to experience this inspiring work can purchase “Cold World War” at bookstores everywhere, or online at the Apple iBooks Store, Amazon, or Barnes & Noble.