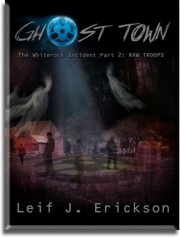 Ghost Town, the Whiterock Incident: RAW Troops picks up where the first volume left off following FBI agent Ethan Drew’s initial investigation and discovery of the horrifying lab work conducted in the town of Whiterock by its longtime resident, Dr. Victor Tesla.  Following his departure, RAW troops, or Remote Alert Warriors, are sent to Whiterock to contain not only current threats, but developing threats in neighboring areas.  Unfortunately, the troops are not prepared for what they discover. The 246-page novel published by Millennium Publishing Company is the second volume in the Ghost Town series.

Hidden Trails is a contemporary page-turner that revolves around a young couple looking forward to their upcoming wedding. When Jennifer's fiancée, Mike, goes off with several friends to explore hidden trails at the local State Park only to abruptly disappear, Jennifer and her friends form a search party. The girls become lost in the forest and are surprised to find an abandoned city hidden within. The strange orphan girl living there offers to help, but something sinister lurks in the forest. As the girls continue their search for the missing men, they too realize, with abrupt and alarming consequences, that some mysteries are not meant to be solved.

The 215-page novel is published by Millennium Publishing Company and is the fourth novel published by author Leif Erickson. Erickson lives in the rural West Central Minnesota, and continues to write, heavily influenced by some of his favorite authors including Washington Irving, J.R.R. Tolkien, John Steinbeck, and F. Scott Fitzgerald.

Leif J. Erickson was born and raised in Minnesota, with the nearby town of White Rock serving as his inspiration for his Ghost Town series of novels.