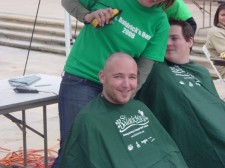 LONG ISLAND, N.Y., February 23, 2018 (Newswire.com) - Sponsored fundraisers are popular with charitable organizations the world over.​ ​​​For one, however, a particular type of fundraising is not only a key part of their effort to raise funds, but it's also partly the reason behind their name.

Known for its head-shaving events, the St. Baldrick's Foundation's name is a nod to fundraisers giving up their hair in support of the charity.

The charity was officially christened at their first head-shaving event, held almost 20 years ago on March 17, commonly known to many as the date for St. Patrick's Day.

"The rest, as they say, is history," says the charity.

It was for St. Baldrick's Foundation that New York native August Ruckdeschel recently committed to shaving off his much-loved dreadlocks.

In 2017, Ruckdeschel set a fundraising target of $3,000 after a previous successful St. Baldrick's Foundation head-shaving event two years ago raised $2,500.

Speaking before the most recent event, Ruckdeschel commented, "As a society, we know we can be doing a much better job of fighting leukemia and childhood cancer and disease, so enough is enough!"

August Ruckdeschel knows only too well the heartbreak which can result from childhood cancer, tragically having lost his younger brother to the disease.

Of his family's terrible loss, he adds, "I don't think I need to remind anyone what the loss of my youngest brother, Ryan, has done to my family. Childhood diseases are just traumatizing to the families affected."

On the day of the head-shaving event last year, August Ruckdeschel not only raised the additional $500 he had set himself the target of raising but went on to raise a further $3,200, generating a grand total of $6,700.

Following a fantastic show of charity from colleagues, friends, family, and strangers alike, Ruckdeschel declared, "I'm so grateful!" before going on to thank those who had sponsored him for their generosity and kindness.

In the last twelve months, almost 15,000 "shavees" and other fundraisers have raised over $12 million for the foundation.

Meanwhile, in the last twelve years, St. Baldrick's has raised a total in excess of $200 million to support research into pediatric cancers. The foundation funds some of the most revolutionary childhood cancer research on the planet, thanks in no small part to fundraisers such as Ruckdeschel.

Having now racked up three outings as a shavee, Ruckdeschel joins the foundation's rank of "Squire of Hope" - a title given for at least three years of service in fundraising for the charity. Other ranks include "Knights of Hope," "Commanders of Hope," and "Crusaders of Hope."

On his ascension to Squire of Hope, the foundation commented, "Be it known to all that August Ruckdeschel has dedicated at least three years of service to the St. Baldrick's Foundation helping kids with cancer throughout all the land."

To find out more, or to donate, visit https://www.stbaldricks.org.