IFM Gets the Scoop on Erin Áine: Acting, Producing, Running a Production Company That's About to Break It Big

LOS ANGELES, November 26, 2018 (Newswire.com) - From child actress to indie producer, Atlanta native Erin Áine started her career at the tender age of 9, signing with Dakota Fanning's agent and working alongside such stars as Malcolm McDowell, Jim Caviezel, Melissa McBride, Giancarlo Esposito, Nina Dobrev and Ian Somerhalder in works such as The Vampire Diaries, Revolution, Quarantine 2: Terminal, Dance of the Dead, Bobby Jones: Stroke of Genius and The Fat Boy Chronicles.

Just like Atlanta becoming an extremely desirable film hub over the last 20 years, Erin Áine’s career, spanning from Atlanta to Los Angeles has done nothing but grow since the late 90s, giving her unique insight into the amazing changes within the film industry, past and present.

Working as an actress through college at Vanderbilt University, Erin moved to Los Angeles after graduating and immediately began working in production in addition to acting. Starting with short films and progressing quickly to over a dozen web series, Erin partnered with fiancé  Kyle Fritz Valle to create her own multimedia company MewNowTV, a creative’s alternative to YouTube. While MewNowTV continues to build momentum, Erin and her team of “Big Squids” (of Big Squid Productions) continue to press forward with new, exciting and long-form content, like feature film ZombieCON: Cosplayers Stuck in a Zombie Apocalypse for which Erin juggles a myriad of roles as co-writer, producer, 2nd AD, casting director, media director and lead actress (“Claire”).

More determined than ever, Erin is proud to be currently touring the festival circuit with ZombieCON, which last month won the Indie Spirit Award at the Orlando Film Festival and received multiple nominations, including Best Ensemble and Best Director, all in addition to a preview screening at the 100,000-plus attended Los Angeles Comic Con.

In this momentous time of female empowerment within the filmmaking industry, Indie Fresh Media wanted to hear from someone who has been in the industry nearly two decades, spanning the late 90s to present. Erin took time to answer a few questions about what her experience has been like.

IFM: Coming up as a child in the film industry, has the biz changed in relation to women?

EÁ: From my earliest days auditioning, I was fortunate to be surrounded by many strong females in the biz, as most of my agents, managers, and the biggest casting directors in Atlanta were all female. However, I was constantly frustrated by the lack of strong/complex roles I got sent out for. There were many awesome male roles, but it seemed like the female characters were being written, on average, as generic and with limited character growth. I’ve also had one unpleasant experience on set in which I was misled to the extent to which an implied sexual act was to be filmed and though nothing bad actually happened, I left the situation feeling voiceless. I’m happy that with the Me Too/Women in Film movements, finally so many inequalities and injustices are being brought to light and the system is changing.

IFM: Do you feel like the current climate has given you an advantage in conquering what seems to be a lifelong goal?

EÁ: I have many lifelong goals! Currently, I’m producing and starring in a feature film that I helped craft, shoot, market and soon distribute. That’s definitely checked some boxes! I don’t feel the climate of today has really affected this part of my journey. I’ve been out of the auditioning game for some time, working on our own projects and probably missed the immediate effects. It’s hard to say. But I think ZombieCON will be affected by the readiness with which the industry is embracing females and diversity in production, the need for it. I hope so.

IFM: Can you speak to your past and present concerning the state of feelings concerning women in film, in how it affected you?

EÁ: I wish I had had more female directors, writers and producers to look up to and emulate as a child actress, because I think it would have been easier to imagine myself following in their footsteps, finding a path to take. There wasn’t a ton of attention in the media about women succeeding in those jobs. Nowadays, however, “women in film” is a topic that people and the press frequently write about, explore and hopefully actionize. It’s completely different in that way from the past.

IFM: What are some of the challenges that you faced while producing ZombieCON?

EÁ: It’d be easier to list the things that weren’t challenges! As with most indie sets, our micro-budget feature was shot with a tiny team, low on funds, personnel and time. We also shot a good deal in our own apartment, which doubled as production HQ, so things were crazy crammed. But all the challenges were opportunities for growth, to expand our skills and find creative solutions. You just have to keep going forward no matter what. I think of production like a train that’s left the station.

IFM: Was this film the first time you handled samurai swords?

EÁ: My fiancé has loved film props and anime since he was a kid, so I’ve had the joy of playing with samurai swords, collectible katanas and tons of movie prop replica weapons all around our place, years before ZombieCON. But nothing felt the same as wielding that samurai sword on camera, with all the emotions and fake blood and (spoiler alert) zombies ... I don’t want to give anything away, but my character Claire had quite a time with these weapons!

IFM: How did it feel acting alongside characters that you actually cast in their roles?

EÁ: Amazing. What could be better? I had the joy of meeting and getting to know the cast before ever stepping foot on set. Some actors in this film I’ve known for years, some I met in the audition room. It’s all very fulfilling and helpful, as both an actor and producer, when you begin filming and already have a relationship with the whole cast. I feel it helped fast-track communication and trust.

IFM: Did they ever shock you with their performances, good, bad or crazy?

EÁ: Yes! You never know exactly what someone’s gonna bring to set, even if you know them well or saw their original auditions. The extra energy and realness that the live set brings, once everyone is in costume, in place and the director is about to call ACTION … it’s palpable and it affects everyone. The ZombieCON cast constantly surprised me: the nuances they added to their characters, little personality quirks and the amount of heart poured into the smallest of moments ... I’m humbled to say I picked a damn good cast and luckier still that I got to act alongside them all.

IFM: Coming from a background in zombie films like Dance of the Dead which made its debut at South by Southwest, Quarantine 2: Terminal and Tom Holland’s Twisted Tales, how do you feel ZombieCON stacks up against other zombie movies?

EA: While ZombieCON certainly fits into the horror/zombie movie category, it’s heavily influenced by anime, especially the characters, and the story’s focus is on the group of cosplaying best friends who find themselves stuck in a zombie apocalypse, how they deal with their immense obstacles and how they grow and are changed as a result. The zombies truly are just one aspect of our film, while ZombieCON’s feel and stylistic elements are very different from what you’d expect of a “zombie” movie. For that reason I can’t really compare ZombieCON with the others, I’m just super grateful for all of the experience gained, folks I met and things I learned on those sets.

IFM: How was working on all of the above films any different? Which was your favorite/least favorite and why?

EÁ: Incomparably different, because I was only involved as an actress in the others, whereas with ZombieCON I’ve been actively working on it since its inception, all the way through its upcoming distribution. I know the cast, crew and film like the back of my hand … especially because this has been my and the Big Squids’ sole focus for several years, it has truly become my life. I prefer being this involved in comparison to being on set only as an actor. They both have upsides and downsides, but I find this involvement more fulfilling.

EÁ: I’m a sucker for old favorites like Harry Potter and The Lord of the Rings. My fiancé has gotten me hooked on so many Kubrick, Hitchcock, Spielberg and Cameron classics too. But right now, it’s gotta be ZOMBIECON!

For information on Erin Áine: 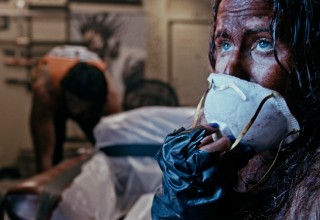 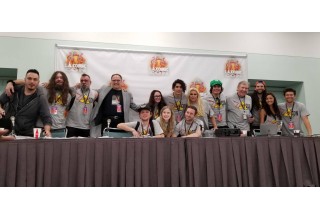 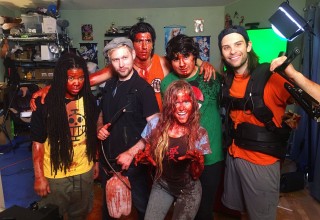 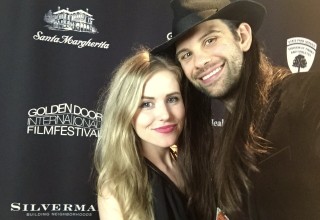 INDIE FRESH MEDIA IS HERE TO DO EXACTLY WHAT IT SOUNDS LIKE, KEEP IT FRESH.

WITH A GOAL OF ALWAYS PROVIDING INTERESTING AND RELEVANT STORIES, IFM IS KEEPING EVERYTHING IN BOUNDS, ANYTHING WE FIND INTERESTING, ANYTIME.