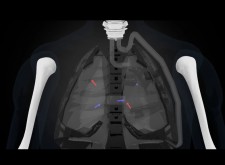 Sarasota, United States, June 13, 2017 (Newswire.com) - Artificial organ transplants are one of the fastest growing medical fields today. Many organs of the body have been transplanted from one individual to the other successfully, while some are still in the experimental stages. Of all the types of transplants overseen today, we’re focusing on advancements with regard to lung replacement.

Lung transplantation is a procedure by which a diseased lung is removed partially or totally and replaced by another lung(s) from a compatible living or deceased donor. It is the last option for patients with end-stage lung disease with failure of all other interventions.

“One of the obstacles in the field of organ transplantation is the unavailability of compatible donors,” said Michael Di Monte, Sr. ScM Physicist at Anti-Air-Lock Corp. “This has led to the death of many patients while on the waiting list. Another challenge is the transplant rejection leading to destruction of the transplanted organ by the recipient’s immune system as the transplant is seen as a foreign organ. Although immunosuppressive drugs are used to prevent transplant rejection, they are not without their own adverse effects.”

Therefore, medical professionals are feverishly looking at any possible alternative that can replace organs, especially the lung, such as Mechanical Air Flow devices like the one invented by Mr. Di Monte.

“Research is commencing on the patented Air Flow device for the development and use as an artificial lung transplant to replace the lung,” said Mr. Di Monte. “Some types of Air Flow devices have been produced in the past. They allow air to enter to exchange the oxygen for CO2 in the blood. However, these devices rely on a constant oxygen feed and are for temporary use only.” The Air Flow device invented by Mr. Di Monte is developed with the possibility of replacing the human lung completely if used in concert with other devices.

One device such as BioLung may be tested in people soon — a device made by Michigan Critical Care Consultants (MC3) for which Robert Bartlett, MD, surgeon at the University of Michigan Medical Center heads the research for BioLung and is credited with inventing the current generation of artificial breathing machines (1).

Dr. William Federspiel of the University of Pittsburgh and his team have also developed an artificial lung and Dr. Federspiel explains how the gas exchange efficiency of the human lung has yet to be achieved by any man-made device (2).

“Our patented technology has been developed and modified with more than 3,000 iterations targeted on correcting many of the deficiencies of earlier Air Flow Devices that failed in testing with an added technology, for the first time ever, to incorporate ability to monitor the artificial lung with data that is transmitted by the device and powered by breathing,” concludes Mr. Di Monte.

Collaboration between organizations working on medical devices within the same field of use can be critical to the success or the failure of producing a working artificial lung. Despite the challenges ahead, scientists, doctors and medical industries as a whole realize that coming together and never giving up allow hope for medical advancements such as the artificial lung transplant to eventually come to term.