The September 29 ICO for CarTaxi will go towards funding the already-functioning business, which has seen rapid growth in the real economy. 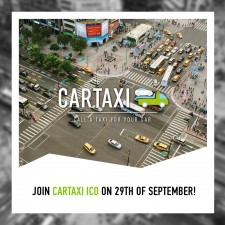 ST. PETERSBURG, Russia, September 26, 2017 (Newswire.com) - Following the greatly successful pre-sale — meeting the goal of raising 3,000 ETH — the CarTaxi Ethereum-based ICO is scheduled to start on Sept. 29. During the first day of the sale, investors can claim a 15 percent discount on the tokens. Investors that bought tokens during the presale have already received the first bonuses.

CarTaxi is the first logistics platform for automation of car towing services. It combines all towing services in one mobile application. For drivers, it is a convenient and quick way to call for help on the road in your city or while traveling. In the media, CarTaxi is called “Uber” for car towing. This is partly true: the application uses an Uber-like interface. However, from off-site services, the platform is distinguished by the introduction of blockchain technology.

Projects on the blockchain in the real sector of the economy, according to the creator of Ethereum, Vitalik Buterin, cannot be underestimated. CarTaxi is one of those key projects.

For cryptocurrency investors, CarTaxi tokens (CTX) is a source of passive income. According to the company’s plans, 25 percent of their profit is distributed in dividend payments to tokenholders. Another 25 percent goes towards repurchasing CTX tokens on exchanges to increase their market value.

According to CarTaxi’s financial analysts, the company’s tokens for the first month after placement on the exchanges will grow at least two-fold. By 2021, the value is expected to grow by 30 times. The main factors of the projected growth are the development and expansion of the business, as well as the timely payment of dividends and the planned redemption of tokens.

In addition to the above benefits, CTX tokens after the ICO can be used to pay for platform services.

Funds raised from the ICO will go towards expanding the CarTaxi service to the American and Chinese markets. The company has chosen these countries because of analyst reports that confirm the service’s relevance and potential success in those areas.

In the region where CarTaxi launched, more than 40 cities have become connected to the service — that number increases every week. According to CarTaxi analysts, the global automotive market for the entire 2017 will increase by more than 3 percent and will continue growing in the following years. Motorization is the main factor behind the rise in demand for car towing, and the growing success of CarTaxi.

CarTaxi CEO Taras Semenov said ICOs are an innovative and effective way to attract investment for developing and operating business. But any new phenomenon that shows a wide range of opportunities, there can be both positive and negative examples of implementation.

“The ICO market is now oversaturated with scam projects that pull investments through fantastic promises, turning out for tokenholders as empty investments,” - Taras Semenov.

Therefore, to date, our task is to inform investors that CarTaxi works within a real infrastructure, with real income, allowing us to pay bonuses to investors already.

Our goal is to extend the service coverage on a global scale in order to make the CarTaxi service extremely universal and beneficial for users and partners. And together with investors, we are changing the growing market for car towing in the same way that Uber changed the taxi market.

CarTaxi is the source of this content. Virtual currency is not legal tender, is not backed by the government, and accounts and value balances are not subject to FDIC and other consumer protections. This press release is for informational purposes only.