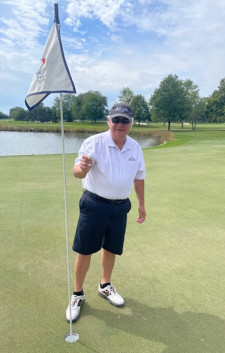 PALATINE, Ill., September 16, 2021 (Newswire.com) - On Monday, August 23, Ron Esposito stepped onto the tee box at Kemper Lakes Golf Course in Kildeer, IL. The Epilepsy Foundation of Greater Chicago was hosting their 21st Annual Tee Off for Camp Blackhawk Golf Outing Hole-in-One Challenge. It was the first tee of the day for Esposito - and it was also the first time in the event's history that someone hit the 165-yard distance in one shot to win this challenge. His prize was either a 2021 Toyota Camry or $27,000 towards a new car graciously provided by the owners of the Arlington Toyota in Palatine, IL.

For Esposito, the victory comes after many years of participation in the event. "I started playing in the Tee Off for Camp Blackhawk Golf Outing eight years ago, but this year certainly added a lot more excitement for our foursome with the hole in one. I thank the foundation and what they strive to do, and it's an honor just to be a part of what they are doing for these kids."

"What a way for Mr. Esposito to start his day with us here at Kemper Lakes," added longtime Kemper Golf Pro Mark Raymond, Jr. "For the Hole in One to happen on his first shot of the day, on one of our tougher holes here, it's quite an accomplishment! It's the first time I have experienced this while running an outing as a golf professional."

Gary Vicari, President, Arlington Toyota in Palatine, was surprised and pleasantly shocked that Mr. Esposito sank a hole-in-one. "Arlington Toyota has sponsored hole-in-ones for charities for more than 20 years, and Kemper Lakes is the first one EVER to win. It's considered a very rare occurrence, and we're glad that the car will go to a person with ties to the Camp Blackhawk Golf Outing and the Epilepsy Foundation of Greater Chicago." Arlington Toyota in Palatine is a community-focused dealership, with directives to enhance the lives of the people of the area while giving back as much as possible. This golf outing is just one of the many ways that they have chosen to provide charitable funds this year.

The Epilepsy Foundation of Greater Chicago is an Illinois not-for-profit organization, serving 44 counties, and offers programs, counseling, advocacy, and educational services to people with epilepsy, their families, and the communities in which they live. The Foundation's Camp Blackhawk is a free week-long retreat for kids and teens living with epilepsy. This camp welcomes 120 participants each summer, giving them an experience they will never forget. Proceeds from Tee Off for Camp Blackhawk Golf Outing directly support this program.