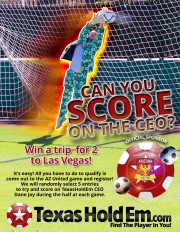 Scottsdale, Arizona, May 5, 2015 (Newswire.com) - Arizona United Soccer Club announced today that it has entered into a corporate sponsorship with Scottsdale-based TexasHoldEm.com.

Per the deal, TexasHoldEm.com’s logo will be placed on Arizona United Soccer Club’s home and away jerseys. In addition, TexasHoldEm.com will sponsor a “Score on the CEO” experience at five of Arizona United SC’s home games at Scottsdale Stadium. Three lucky fans will be randomly selected to try to score a penalty on TexasHoldEm.com CEO Dane Joy. All participants who score will be entered into an end of season draw for a trip to Las Vegas. Dates for the “Score on the CEO” will be announced at a later time and the partnership includes co-marketing opportunities.

The "Score on The CEO" promotion will give the AZ United fans a chance to score on the TexasHoldEm CEO Dane Joy! If they score, they can win a trip Vegas for two! It's a fun promotion that puts us face to face with our members. Find the player in YOU!

“The ‘Score on the CEO’ is going to be a great addition to what will be a very vibrant atmosphere at our home matches at Scottsdale Stadium,” said Arizona United SC General Manager Kevin Stevenson. “Along with having placement on our home and away jerseys, we are looking forward to a long-lasting relationship between Arizona United SC and TexasHoldEm.”

TexasHoldEm.com is a revolutionary membership based site that offers its players real prizes in daily online poker tournaments including seats to the World Series of Poker in Las Vegas. It is free to play and there are no buy-ins and no deposits required. “We are extremely excited to support Arizona United SC and the local soccer community as popularity in the sport grows” states CEO Dane Joy. “There is a real synergy between sport and poker and we look forward to growing the relationship.”