Aria Peralta's New Book "Amores Y Desamores en Tiempos De Twitter" is an Absorbing Tale of the Discovery of Love, the Hurt of Betrayal, and the Dangers of Social Media 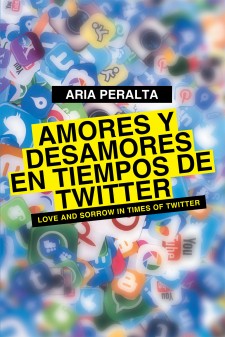 Miami, FL, July 3, 2017 (Newswire.com) - Aria Peralta, a creative writer and dedicated author, has completed her most recent book “Amores y Desamores en Tiempos de Twitter”:  a gripping and powerful story that explores love, the dangers beyond love when tossed with so many distractions and false realities, and the inborn human capacity to be happy.

Published by Fulton Books, Aria Peralta’s book centers on Victoria and James. Victoria is a beautiful, professional and intelligent girl, attracted by the study of occult sciences. James is a brilliant, exemplary worker, with a charming personality.

James and Victoria work for the same company and realize they have an affinity for astrology, which leads them to become friends and explore a romantic relationship. After months of dating they decide to get married and leave their hometown to build a new life abroad where they have more opportunities to enrich their lives and strengthen their relationship. They are the perfect couple until the inappropriate use of innovative technologies that connect people globally, begins to separate them.

James gets connected with the world while he gets disconnected from his family. Victoria is left alone assuming the role of both mother and father. Their lives quickly become more and more complicated, as duties and responsibilities compound, and James seeks an easy way to escape from that reality.

What starts as a game to escape reality and to feed his male ego becomes a great betrayal to Victoria, who finds every episode of his infidelity documented in social media. With her world seemingly collapsing, Victoria manages to reinvent herself in a foreign country as a single mother, discovering principles of occult sciences, and relying on the universe, which conspires to uphold her.

Krystan and Kayron's New Book 'The Reluctant Savior' Begins a Riveting Trilogy of Deuce's Return to Earth With a Mission
Fulton Books - Aug 7, 2020