California based Gordon R. Carrier, FAIA has played a key role in the revitalization of downtown San Diego. 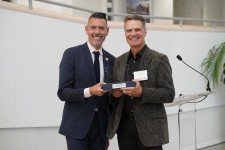 SAN DIEGO, Calif., October 25, 2019 (Newswire.com) - Gordon R. Carrier, FAIA, founder and design principal of the global design firm Carrier Johnson + CULTURE, has received the University of Michigan Taubman College of Architecture 2019 Distinguished Alumni Award. Taubman College recently hosted its annual Milestone Reunion Dinner, honoring alumni who celebrated their 25th and 50th reunions as well as alumni emeritus. Carrier received both his bachelor's of science in architecture in 1979 and his master's degree in architecture in 1981 from the University of Michigan Taubman College.

“I’m honored to have received this award from Taubman College where the foundation for my professional career began,” says Carrier. “Our work seeks to achieve meaning beyond physical structures. We are passionate about leveraging the relationship between built environments and the public spaces that inform them.”

Carrier has honed his focus through his work with Carrier Johnson + CULTURE, an international architecture, interiors, and strategic branding firm, which was founded in 1977. The firm is headquartered in San Diego with satellite offices in Los Angeles, New York and Seattle. Carrier has assembled an impressive history of award-winning work in both the public and private sectors.

He is a passionate advocate for improving urban settings through the integration of quality architecture and design. As such, Carrier has played a key role in the revitalization of downtown San Diego, which has been one of the most significant and sustained urban redevelopment experiments in the United States. In the heart of San Diego’s downtown, Carrier’s notable work can be seen in the lively Gaslamp Quarter, the stylish Little Italy neighborhood, the vibrant Central Business District, and the emerging East Village District.

Carrier is certified by the National Council of Architectural Registration Boards and is a Registered Architect in California, Arizona, Colorado, Utah, Nevada, Maryland, Michigan, Texas, Missouri, Iowa, and Virginia. Carrier was also installed into the American Institute of Architects College of Fellows for distinguished service to the profession in 2008.

For more information about Carrier and to see his firm’s impressive work, visit CarrierJohnson.com.

Carrier Johnson + Culture is a global architecture, design and strategy firm. Instead of building spaces from the ground up, they design from the inside out. For more information, visit CarrierJohnson.com.