The following is an open letter from Rev. Kirby de Lanerolle, Chief Overseer of the Apostolic Diocese of Ceylon, on eradicating terrorism in Sri Lanka. 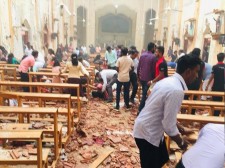 COLOMBO, Sri Lanka, April 30, 2019 (Newswire.com) - ​​​​​​In the wake of mourning, we owe ourselves some soul searching as how we respond and move forward will shape and determine the vigilance of our nation towards hate. It is true of the saying that united we stand and divided we fall.

The spirit of hatred knows no kind, no race, no face. Though these recent attacks were targeted at churches, hotels and tourist spaces on Resurrection Sunday and hoards of worshiping Christians and Catholics lost their lives and loved ones – many of the victims were in fact Buddhists, Muslims, Hindus and atheists… it is almost unbearably painful to think this tragedy could have been avoided or even mitigated.

Could it be that a systematic de-sensitization towards minority rights were the cause for negligence by the authorities to act on the warning they received more than a week prior to the fatal terror attacks on Resurrection Sunday? It is of common knowledge that Sri Lankan Christians have lived in jeopardy without recourse to some of the most basic fundamental rights.

The simplicity of burying the dead in public cemeteries, construction of their churches or refurbishment, are violently objected in many areas. When pastors and believers go to the police after such attacks, investigations and responses have been slow or altogether void. The authorities’ responses to the current situation, where they indicated that they had prior information that attacks were going to take place but didn’t think it would be on this scale, is a case in point.

This alludes to two questions:

The Apostolic Diocese of Ceylon (ADC) revived its mandate in 2015 as the need constituted the call to Cover, Protect, Advocate & Educate the free churches in Sri Lanka. In less than a year we welcomed over 600 churches because of the Advocacy and protection that it was offering.

Some of the higher Echelons of government have been sympathetic towards the rights of Christians, but unfortunately, this has not filtered down to de facto bodies who carry out the protective work at the grass root levels. When frequent outcries of a minority in trouble fall on deaf ears of law enforcement rank and file, systematic de-sensitizations render these state bodies ineffective to be alert to threats, regardless of the magnitude of those threats.

Police stations throughout Sri Lanka are so used to getting complaints from Christians that are persecuted that most of these allegations of discrimination and violence are met with patronizing gestures and seldom receive an effective response. Many a time, higher officials and ministers have to be contacted and influenced to ensure that Christians’ most basic rights are protected and that a vigilant investigation and protection system are in place.

It is vital that we call upon our nation’s leaders to lead by example and carry out their roles in a mindful manner that will not seed division and discrimination. Citizens and residents of Sri Lanka are watching closely for the protection that will be afforded to them as a whole in this state of emergency. It would assure us if the President who chairs the National Security Council would clearly state that protection would be given to all Christians.

Many of the free churches have canceled their services and still remain vulnerable, yet threats to them still remain unnoticed or ignored. Protection only for our larger denominational brothers that constitutes more Parliament election votes won’t safeguard a democracy in the long run. If the highest authorities adhere and show strong “political will” to give equal attention to the least and the softest voice, it sensitizes the rank and file towards vigilance and comprehension of the seriousness of religious hate. A top-down approach is essential to solidify the inter-religious harmony that the island claims to embody.

The free churches have been meeting for many years in hotels, town halls and convention centers because they often have no set structures of their own. Terrorist attacks are attracted towards vulnerable unprotected groups. It would be a faux pas to protect only the more predominant denomination when part of the attackers’ intentions was clearly targeting Christians as a whole. This has been a historical reoccurrence in Sri Lanka. Since Christian persecution has been negligently handled, this segment’s vulnerability can be attractive to extremist and terrorist hate cells to take advantage of. It could be considered that one possible reason Sri Lanka was selected for this attack might be due to the fact that Christians are known to be unprotected vulnerable targets, simplifying the organization of violence against them. While the pressing question at present is why the prior report on the attack was ignored by a large body of authorities, it becomes easier to comprehend the lapse when one considers that authorities routinely ignore or gloss over threats against Christians.

It is time that the government clearly states that religious hatred even to the smallest of us will be taken seriously. Sensitivity has to be built through awareness. Minority rights require to be promoted and protected with the same gusto, the same political-will backed sentiment and same effectiveness as the rights of majority groups; when the state affords all its citizens equal treatment, it is a healthy symptom of a good democracy.

It’s time as a nation, to search our hearts deeply and be able to have more sophisticated dialogue as to why we are intolerant towards others’ beliefs. If we do not consider our own prejudices and how we can nation-build, without fear of accommodating every race and faith as an equal stakeholder we would leave a divided nation for generations to follow.

Today, moderate Muslims are in fear of a backlash, solely because one group can scandalize the entire community as radicalized. This leaves many who belong and love Sri Lanka in fear of their own countrymen because we have not taken the time to open dialogue and assure them they are safe and not vulnerable to misplaced backlash. This must not be allowed to happen by Christians who have suffered this violence. Sensitivity to go deeper into understanding the groups that make up this beautiful island is a conversation that needs to be embraced. If we are to not move backward as a country, progressive religious and political leaders would need to sit together and take ownership of each other and account for each other’s well being. Even the smallest minority on this island, who may not possess the slightest political clout, still requires to be afforded the fundamental rights and equality of the whole. There is nothing less that every Sri Lankan deserves.

Our continued heartfelt prayers and support go out to everyone affected – of all origins and faiths. 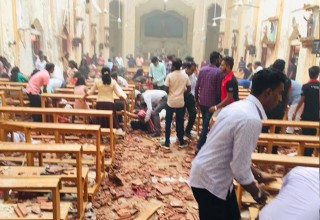 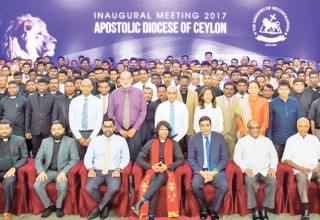 About The True Messenger

Stands as the TRUE Christian Messenger to the region. Reporting christian news mainly from the regions of Sri Lanka and India. unbiased to any denomination.