The list highlights potential future leaders who are 'ones to watch' in the year ahead and includes politicians, mayors and public servants 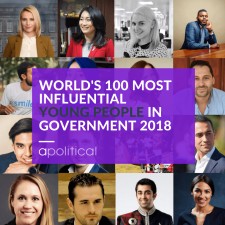 The list recognises young people from all over the world who are making an impact early in their government careers — those included are all 35 years old or under. Apolitical is optimistic about the future of government, and we want this list to highlight the work of remarkable young people who could lead us into that future.

The world urgently needs more smart, mission-driven young people in government. We hope that by showcasing the impressive young people on this list that we will also inspire more young people to follow in their footsteps.

Some are rising stars who are already winning attention for the work they do. Others may work behind the scenes, but wield unexpected amounts of influence for their age, or inspire their peers or older colleagues to greater things.

Public servants from all levels of government appear alongside local and national politicians. Whilst the politicians may be better known as formidable campaigners and communicators, we also recognise that machinery of government is often driven by lower profile but crucial civil servants that are working to improve the lives of citizens every day.

On the list you’ll find remarkable young people including

The 100 Most Influential Young People in Government were curated from nominations from hundreds of public servants from over 20 national governments as well as experts at Harvard, Georgetown, One Young World, Plan International, the UN and the OECD.

“Apolitical’s platform champions new ideas and fresh thinking in the public service,” said Apolitical CEO Robyn Scott. “By highlighting the work of the next generation of government, we aim to build support for  the young leaders taking government into the 21st century.”