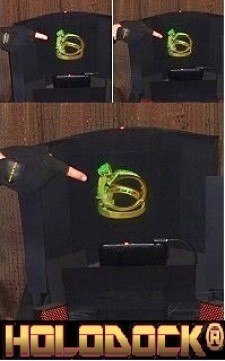 Lawrence, Kansas, May 3, 2016 (Newswire.com) - ​Finally an affordable, personal Holographic aerial image display for the home or business.  You can see it in 3D stereoscopic action now!

The HOLODOCK is not one of those common Holographic displays that imprisons a “Peppers Ghost” image inside a transparent pyramid-like structure or behind a transparent flat sheet that is positioned at an angle or vertically.  In contrast the HOLODOCK frees the 3D appearing image to hang and move in aerial space in front of a thin background structure; without the need for special viewing glasses.  The appearance is much more reminiscent of the famous outer space sci-fi fantasy movie scene wherein a Holographic image of the beautiful princess of intergalactic heritage is projected in front of the small friendly robot.

The presented snapshots and video are of the actual optical performance of the HOLODOCK display as captured by a consumer level 3D camera using automatic settings. They are not simple cut and paste 3D mock ups.  Refer to the accompanying 3D image pair viewing instructions for the proper naked eye method of perceiving the presented images.

In the current version, a typical 2D tablet is docked in front of the background structure of the HOLODOCK.  A 3D enhancement of the tablet's image appears to float before a viewer who is standing, more or less, directly in front of the structure.  The window for the floating image is approximately 5 inches tall by 5 inches wide.  It appears, in a mesmerizing fashion about one foot out from the thin background surface behind it.  One can see in the presented floating images of the emerald ring that they do not appear dim in the ambient room lighting.

After some special anamorphic processing, 2D Video imagery such as commonly found on the web may be used  as an abundant source for the HOLODOCK.  Owners will be able to process their choice of many 2D photos, videos and digital images for subsequent 3D effect aerial image display by the HOLODOCK.  Apps for telecommunication, interactive games, education, advertising, 3D printing prototype display and other popular interests will be developed alongside in support of the HOLODOCK.  The current system minus a tablet should go for around $100 for its introductory price; with some simple assembly required.  A Fall 2016 availability for purchase  just in time for the holiday season, is anticipated.  Further inquires may be addressed to roger.holden@theholodock.com

3D Image Pair Viewing Instructions:  A recommended width of the included photo stereo image pair(the two small pictures on top of the larger one) for naked eye 3D viewing is about 3.5 inches or less(same for the included video, 480p recommended).  If the width appears wider than that, then the screen might have to be adjusted to diminish the image pair width for comfortable viewing.  Start with your gaze on the Right Image of each image pair.  Now relax the eyes as if they were very drowsy and are seeing double.  When viewing correctly in 3D you will perceive three images instead of just the current two of the image pair, with the one in the middle now appearing in stereoscopic depth.  If you see four images instead of three then simply ease up a bit on your double vision until you see the desired three.

The HOLODOCK® patent pending technology is the creation of inventor, innovator Roger Holden.  In the early 1980's Holden designed the robotic camera system used by PBS's Reading Rainbow series to film the vast majority of their Feature Books for the first 5 seasons(www.rainbowcybercamguy.com).  In 2005 his co-invention(not the HOLODOCK) was featured on the Discovery Channel special series, The Science of Star Wars, as a real example of Holographic display technology anticipated by this timeless movie.  In 1995 Holden collaborated with William S. Burroughs on a series of 3D digital stereogram cut-ups, one of which was displayed at the Los Angeles County Museum of Art in 1996.  Previously Burroughs wrote in a 1994 inscription, Roger Holden, who always has tomorrow's ideas today.  In June 2014, Yoshimitsu Banno Executive Producer of the Legendary Pictures/Warner Brothers Godzilla movie wrote to Roger, Godzilla is making a tremendous record of mega-hit in the world.  It started this plan eighteen years ago by your idea to make a TV series of Godzilla vs. Hedora.  I appreciate greatly your earnest help of promotion in the beginning stage.

The HOLODOCK Holographic Display is the creation of longtime inventor and innovator Roger Holden.