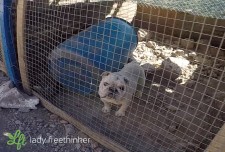 On Aug. 29, a historic first occurred when the defendant — an illegal dog breeder and known dogfighting organizer — received the maximum sentence of three years imprisonment, along with the maximum fine possible, and a lifelong ban on ever having an animal in his possession again.

“It is the first conviction achieved here in the San Felipe Prosecutor’s Office regarding the crime of animal abuse resulting in death,” said Prosecutor Palacios Bobadilla, in a press release. “For animal groups, a precedent is set regarding animal abuse... it is the maximum penalty established by the law: the three years of imprisonment and...the maximum fine of three Monthly Tax Units.”

The case began in 2018 when in July, LFT sent an undercover reporter to the defendant’s property in the Chilean town of Llay Llay, and secretly filmed footage of nearly two dozen dogs living in deplorable conditions. All were sick, wounded and starving.

LFT’s findings were pretty gruesome: Dogs were kept on short, heavy chains, or in small, filthy kennels with no food or water. Their otherwise-empty bowls were coated in green slime.

One pit bull had scars and wounds on his neck consistent with those of dog fights. Many dogs had eye infections or other untreated ailments. Three dogs were already dead, their bodies decomposing in the dirt. Veterinary examiners believe they starved to death.

Additionally, more than 30 hens and cockfighting roosters were caged on the premises. Nobody appeared to live on the property to care for any of the animals.

The footage led to the defendant’s arrest by the Chilean police and in the seizure of 21 dogs from the property. The three deaths aggravated the animal cruelty charges, leading to an increased sentence. Meanwhile, the surviving dogs were placed in foster care and have since found loving homes.

Following the investigation, Lady Freethinker submitted to the San Felipean court a petition with more than 22,000 signatures from people around the world calling for justice in this case, and urging prosecutors to start treating animal cruelty cases with the severity they deserve. 14 months later, their voices were heard and a historic ruling was made.

“This historic sentence is a tremendous win for the animals of Chile,” said Lady Freethinker President Nina Jackel. “Gone are the days when animal abusers can commit violent acts without fear of consequence. My sincerest thanks to the prosecutors and judge in this case for taking a strong stand against animal cruelty.”

Lady Freethinker’s recent investigations include exposing the deadly dogfighting trade on Facebook and a dog-meat farm in South Korea.

Founded in 2013, LFT is a Los Angeles-based nonprofit media organization dedicated to exposing and stopping the suffering of animals, humans and planet. Through its undercover investigations, news reporting, and petitions, LFT aims to end cruelty and promote humane treatment of all species, bringing to light suffering that may otherwise go ignored.