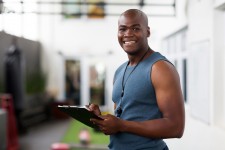 Hesse, Germany, June 12, 2017 (Newswire.com) - Andrew De Niese is a personal trainer who has always taken great pride in his own appearance and level of fitness. He met his wife Patricia Mince several years ago in the gym, and the two seemed perfect for each other. She was an aerobics teacher and just as passionate about working out and staying fit and healthy.

The two got married several years later, and it wasn't long before they decided to start a family. However, after the birth of their first child Alana, everything changed. Andrew De Niese says: "I know we should have been prepared for this, but we weren't. You hear about the sleepless nights, the not being able to have time for yourself anymore, but you don't really believe it until it happens to you. Both Mince and I were horrified! With all the things we had to do around Alana, there barely was any time left to do workouts, let alone have some time just for ourselves."

Watching his wife get more and more exhausted, and himself not being far behind, Niese decided to come up with something to solve the problem. Having started his own gym, together with Mince, several years back, he had the freedom to try things out at little to no personal risk. And his idea was innovative: napercise. The word "napercise" is essentially a mixture of "napping" and "exercise," and that is precisely what it is. Essentially, Niese has created a class where people can spend time together for an hour and nap.

The class itself lasts for a full hour. It starts with some stretches to help release tension, and ends in the same manner. In between is a 45 minute period of pure napping. Niese says: "I've really created something unique here. I have worked together with sleep experts and other physicians to determine what the perfect temperature is for a nap. I also provide eye masks, comfortable blankets, and a bed. The class has been running for two weeks now, and it is hugely popular!"

Mince fully supports her husband with regards to the napercise classes. She says: "He is so attentive to everybody's needs. He knows how hard things have been for me, and for him as well, and he recognizes that deep down, every parent probably feels the same way. People have called him crazy for starting a napercise class, but considering how popular it has become, I think people are sneakily admitting that they just need that hour to themselves."

The truth is, Niese had done his homework. Research has revealed that 86% of all parents claim to be tired or even exhausted. Hence, the main goal is to attract parents to the class, although anyone can take part. Andrew De adds: "Let's face it. We live incredibly busy lifestyles nowadays whether we have children or not, and we could all do with a good nap every once in a while."

The trial run of the napercise classes was incredibly popular, and Niese had received a lot of positive comments because of the classes, particularly because of his attention to detail. He has actually devised the room in such a way that it helps to promote calorie burning. He adds: "The stretches before the naps, the comfortable beds, the atmospheric background noises, and the fact that it is done during prime siesta time, all help to return the body's metabolism to its natural state, and this helps with calorie burning."

The sleep experts who have worked with Andrew De Niese have been very impressed with what he has done. In fact, they feel that napercise may indeed have important fitness benefits. Niese adds: "People seem to forget just how important sleep is when it comes to their overall health. We tend to sleep because we're tired, rather than understanding the fact that sleep is essential for us to be happy and healthy overall. Sleep is about so much more than getting rid of those unsightly eye bags. It is an opportunity to reset things and relax."

In fact, lack of sleep has been linked to an increased chance of depression and/or anxiety. Added to that is the fact that people who have insufficient sleep no longer have the energy to partake in regular exercise, nor do they have the mental clarity to make healthy food choices. This means that lack of sleep has very far-reaching negative effects on overall physical and mental health.

The class has now proven to be so popular that Niese is considering starting a second one, hoping that Mince will be happy to take it on.