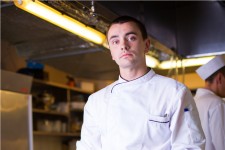 After his show gained popularity, he decided to be more active in his community by giving speeches in colleges, helping local businesses and promoting the community spirit at every opportunity.

Andrew De Niese is also excited about his first book. He confessed that he always imagined that one day his cooking advice and expertise would be put on paper and used by many cooks in their homes.

“I’ve always wanted to write a cookbook,” De Niese said. “With the show’s success, it was a must-do for me. I’m glad the success from the show carried over to the book.”

Getting his first book published has opened many doors for De Niese. Since then, he has been requested by locals to be involved in a number of projects, including helping students from local colleges find out more about the culinary history of Europe and learn how they can make wholesome meals without breaking a sweat.

Andrew de Niese describes his projects as both exciting and humbling, and he hopes more people will be interested in cooking after they watch his show or read his book.

On top of this, the viral chef was also requested to lead culinary classes at an institution, an activity he finds particularly rewarding.

However, he doesn't want to limit his teaching to institutions. His ultimate goal is to teach more people about the joys of preparing and enjoying exotic flavors in their homes.

His show is a competition style cooking show where a guest chef prepares a special dish with the host, a representative of European culinary history while using ingredients that are not only inexpensive but can also be found in any supermarket. This way, each dish can be easily replicated by viewers in their own kitchen.

In each show, both chefs prepare a four-course meal and teach the audience little-known tips that are used in the world's biggest restaurants by chefs.

The atmosphere is fun and relaxed, and it is an open-air cooking show. The audience is quite lucky too since they always receive cocktails and appetizers along with the four-course meal, prepared by the guest and the host of the show.

Andrew de Niese considers his recently published book as his biggest accomplishment, since the book captures the best four-course meals on the show, including the grilled octopus tacos with a charred flank steak, as well as the best recipes from his guests.

The chef from Bakersfield also created a separate cooking show where he explains how his best recipes are prepared. This helps his viewers get a better understanding of each step of the process.

The chef’s goal is to show to his audience that you can cook simple yet delicious meals without having years of experience in the kitchen or making a hole in your pocket.

The ingredients he uses can be found in any kitchen, yet he compiled a list of the best recipes in European history while keeping his audience’s shopping list relatively unchanged.

His book also contains the advice and guidance of some of the best chefs in the country and comes in handy for any cook, experienced or not.

Andrew de Niese is proud that his show and book created some buzz and attracted some attention of the culinary industry. He strives to show anyone that cooking is not a chore, but an art that can bring satisfaction without breaking the bank.