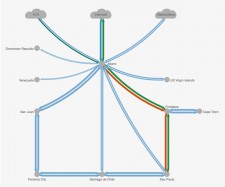 MIAMI, March 31, 2020 (Newswire.com) - On March 1, 2020, FIU announced AmLight Express and Protect interconnects three continents by activating 100G end-to-end links between the U.S., Brazil and South Africa. Now this Research & Education networking advancement is showing its worth. The West African Cable System (WACS) suffered a significant fiber cut on Friday, March 27, at the worst possible time for South Africa. Currently, people are relying heavily on the Internet for work and communication in general during a three-week national lockdown. The cut is between Portugal and the U.K. The AmLight-SACS project (NSF OCI-1937344) is successfully utilizing a 100G pathway using the South Atlantic Cable System (SACS) and West African Cable System (WACS) at the Angola connection point, to connect Africa from ZAOXI open exchange point in Cape Town, South Africa to the AmLight-ExP network in Fortaleza, Brazil to the United States at the AMPATH Open Exchange Point in Miami, Florida and to all of the Western Hemisphere. Furthermore, traffic destined for the U.K. and other points in Europe can be routed across the North Atlantic once it reaches AMPATH.

The majority of the Research & Education network traffic from South Africa destined to the Americas is currently routed via the recently activated AmLight-SACS connection.

The AmLight network engineering team in the U.S. and Brazil is monitoring current traffic as it propagates through this South Atlantic route. In the meantime, TENET is receiving peering traffic (NOTA and FL-IX).

“TENET offers intelligently engineered infrastructure for the Research and Education community of South Africa. A recent cut in the North Atlantic on the WACS cable allowed us to dynamically use a new protect path directly from Africa to South American, then to the U.S. This link was recently put into place in partnership with the AmLight consortium, including FIU and RNP. Southern Hemisphere connectivity contributes greatly as part of our focus on redundancy. We are excited both for enhancing the diversity of protection options this affords us, and the opportunities for closer collaborations,” said Duncan Greaves, CEO of the Tertiary Education and Research Network of South Africa.

AmLight-SACS has succeeded because of the strong and consistent collaboration between the partners: Florida International University (FIU), Rede Nacional de Ensino e Pesquisa (RNP), Tertiary Education and Research Network of South Africa and South African National Research Network (TENET/SANReN), and Angola Cables. Linking the U.S., Brazil and the nations of Africa to support robust networking, using the diversity of a new South Atlantic route, is the culmination of three years of careful planning and execution to provide a diverse networking path for all collaborators,” said Heidi Morgan, Co-Principal Investigator and lead for the AmLight-SACS project.

AmLight-ExP implements a hybrid network strategy that combines optical spectrum (Express) and leased capacity (Protect) that builds a reliable, leading-edge diverse network infrastructure for research and education and operates network links connecting Latin America and Africa to the U.S., funded by the NSF, award #OAC-1451018; with investments from ANSP, RNP, and AURA. Total bandwidth between the U.S., South America, and Africa has reached more than 780 Gb/s in upstream capacity. https://www.amlight.net

FIU: A research university serving its students and the diverse population of South Florida.

ANSP: The Academic Network of Sao Paulo provides connectivity to the top R&E institutions, facilities, and researchers in the State of Sao Paulo, Brazil.

AURA: Association of Universities for Research in Astronomy is a consortium of 40 U.S. institutions and four international affiliates that operates world-class astronomical observatories.

UbuntuNet Alliance: A regional research and education network in eastern and southern Africa.

USC/ISI: University of Southern California Information Sciences Institute in the Viterbi School of Engineering specializes in research and development in information processing, computing, and communications technologies. 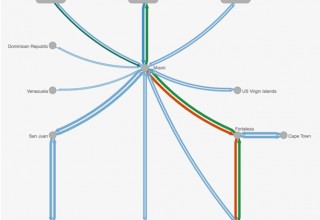 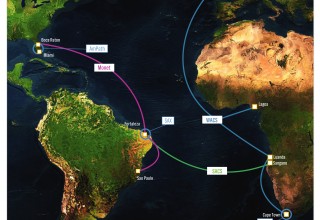