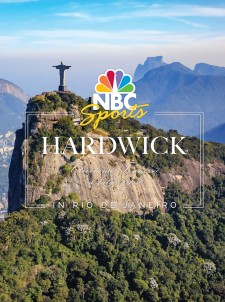 Hardwick, originally founded July 28th, 1880, was recently announced as the in-studio men’s apparel provider for NBC’s on-air talent for sports coverage that will air on 11 networks and have an unprecedented 6,755 hours of programming across NBC’s broadcast and digital platforms, making it the most live Olympics ever.

"This has been a great year for Hardwick as we celebrate the pendulum swinging back to 'Made in America.' Hardwick is the oldest business of its kind in America and Allan Jones and I will continue working together to make the brand famous again worldwide."

Recent times haven’t always seemed too bright for this southern institution, as the organization was on the brink of bankruptcy only two years ago.  It was then that  businessman Allan Jones, a native of Cleveland, TN, stepped in to save 300 jobs in his hometown and preserve an American legacy.

In addition to the national spotlight with NBC’s Olympic coverage, the company has had a remarkable year that includes being named Garden & Gun’s 2015 “Made in the South Awards” style category winner with their Super 150’s Italian Blazer, recognized as a 2016 Top Innovator by Apparel Magazine for their new launched H-Tech Collection, as well as their release of their King Cotton Khaki collection that is being billed as the “best khaki pant in the world.”

“This has been a great year for Hardwick as we celebrate the pendulum swinging back to ‘Made in America,’” said Hardwick CEO Bruce Bellusci. “Hardwick is the oldest business of its kind in America and Allan Jones and I will continue working together to make the brand famous again worldwide.”

Cleveland, Tn., businessman C.L. Hardwick founded Hardwick Clothes on July 28, 1880 and the company stayed in the family until the Jones acquisition.

“Old Glory only had 38 stars in 1880 and we are still raising the same flag C.L. Hardwick raised on the company’s first day 136 years ago,” Mr. Jones said.  “Since that first day, the company has survived two major fires, two World Wars, the Great Depression, leisure suits, NAFTA and – worst of all – making us watch China manufacture our Olympic team’s blazers.”

Jones’ career began at the age of 20 after he left college to help his father, who was suffering from emphysema, stabilize the family’s small, manually operated credit bureau located in his hometown of Cleveland.  Jones built the business into the largest credit bureau database in the state and then turned the collection agency into the largest in Tennessee as well, with offices from Memphis to Atlanta.

Mr. Jones founded Check Into Cash – the second largest payday lender in America - in 1993 and the company grew to include 1,300 locations nationwide. He has numerous other brands, including LendingFrog.com, U.S. Money Shops and Buy Here Pay Here USA, LoanbyPhone.com. He is one of the largest title lenders in the country and has become one of the largest internet lenders through CheckIntoCash.com.

Hardwick Clothes, Inc., located and operated in Cleveland, Tenn., has been producing clothing domestically for 136 years. The mission of Hardwick Clothes, Inc., is to provide customers with exquisite, high-quality, American-made products, which they can wear with pride. The brand's tailor-made clothing features top-quality fabrics and meticulous attention to detail.

Jones recruited top executives from Hart Shaffner & Marx, Hickey Freeman and Southwick Apparel in order to ensure the talent from these premier brands would make Hardwick the best.

Since then, Hardwick Clothes has focused on seamlessly integrating complete collections that reflect the true sensibility of the brand: American-made quality, style, and value.

Hardwick Clothes, Inc., located and operated in Cleveland, Tenn., has been producing clothing domestically for over 135 years. Hardwick Clothes' mission is to provide customers with exquisite, high-quality, American-made products to wear with pride.