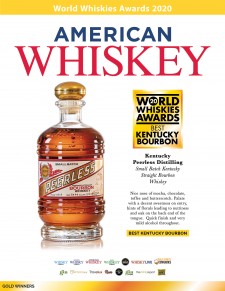 Owner and Fourth Generation Corky Taylor responds, “We are honored to be named the 2020 Best Kentucky Bourbon by American Whiskey magazine. Considering all the great bourbons made in Kentucky, we are humbled to receive this award. This award is shared by our team and wouldn’t be possible without them.”

Peerless Master Distiller Caleb Kilburn said, “Being recognized in front of your heroes is an unbelievably humbling experience and truly a dream come true. There are so many amazing bourbons and distilleries in Kentucky, so for us to be commended among the greats is such an honor. Our team, our families and our supporters have all worked so hard to make this possible and we are blessed to have them.”

The World Whiskies Awards are industry-nominated, and according to their website, judged by a panel of “leading journalists, specialist drinks retailers and industry experts”. Find out more at kentuckypeerless.com or visit the distillery at 120 N. 10th Street in downtown Louisville. The distillery is open for tours and tastings Monday through Saturday 10 a.m. to 5 p.m. and 10 a.m. to 7 p.m. on Thursdays and Fridays.

The Peerless family’s very first bourbon went into a barrel in 1889. They have since revived the craft in their own state-of-the-art distillery in the Bourbon District, where they use the finest ingredients. The Peerless family believes that patience builds character and fine Bourbon and Rye can never be rushed. All under one roof, the select Kentucky Peerless grains are milled, cooked, fermented, double-distilled and barreled as Bourbon and Rye.