THE AMERICAN IDOL AUDITION THAT JENNIFER LOPEZ DOESN'T WANT YOU TO SEE! WHO STOPPED IT FROM AIRING? IS POLITICAL CORRECTNESS DESTROYING COMEDY? 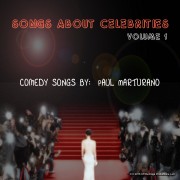 New York, NY, April 5, 2016 (Newswire.com) - ​​​Somehow, years after he pulled off one of the biggest television pranks on American Idol by jokingly singing a song to Paula Abdul about stalking her, Paul Marturano found his way back onto the American Idol stage to sing  a song called Jenniferr Lopezz's Booty with lyrics such as: "...It's hanging out next to Harry Connick, I bet it hates all those hi colonics… and …It's a beauty, It's fresh and fruity, It won just as many sooper boles as Doug Flutie…" Hear it at www.songsaboutcelebs.com

​​​​​​​​​​​​​​​​Even though the Jennifer Lopez Booty song never made it to air, it lives on the new album, Songs about Celebrities, Volume 1. www.songsaboutcelebs.com

Somehow, years after he pulled off one of the biggest television pranks on American Idol by jokingly singing a song to Paula Abdul about stalking her, Paul Marturano found his way back onto the American Idol stage to sing a song that is just as heartwarming to Jennifer Lopez, a song called Jenniferr Lopezz’s Booty with lyrics such as:  ...It’s hanging out next to Harry Connick, I bet it hates all those hi colonics… and …It’s a beauty, It’s fresh and fruity, It won just as many sooper boles as Doug Flutie… ​

This is the audition that American Idol did not air during their final season audition shows. According to Marturano, he sang the three judges the cleaned up for TV version of the song at the Philadelphia auditions instead of the raunchy version. It was such a great prank and I will probably never get to see it. Nothing I do is ever meant to be malicious, it is always meant to be fun. Political correctness is destroying comedy, said Marturano.

His latest musical comedy release, Songs about Celebrities Volume 1, includes both the regular and TV version of the Jennifer Lopez Booty song as well as the songs, If Jimmy Fallonn Were My Neighbor, Transjenner, Taking a Dump on Ty Penningtonn’s Front Porch and many others. It is available at www.paulpiano.net

Ty Pennington recently heard my song, Taking a Dump on Ty Penningtons Front Porch, Marturano says with a smile, Ty sent me a funny video response. He has a great sense of humor.  https://www.youtube.com/watch?v=zFGsj-ix7mM

Marturano entertains full time as a piano playing singer/comedian. He performs and schedules piano players for his dueling piano show in Atlantic City at The Playground on Caesar’s Pier and performs at a variety of venues on the East Coast. In 2015, he performed over 170 live shows, spent over 600 hours on stage and is on pace to do the same in 2016. His show is a mix of music requested by the audience as well as raunchy musical comedy. The show has become a staple at The Playground.

Marturano said he would like to see the audition air at the American Idol Finale but isn’t counting on it.

I put in the time to write the song and go perform it for them. I don’t want to just give up. I want to see it through and see the smalltime comedian win for once, said Marturano.

According to Marturano, when he is on TV and when he writes comedy songs, he is just playing a ridiculous character and it is all acting.  He does have a serious side and if you want to know who he really is, you should pick up his new Piano Rock/Pop album, Reflection, or read his book, 33 Beliefs for a Happy Life (also available as an audiobook).  Some of the songs he penned for Reflection are actually quite heartfelt. If you like Billy Joel, Ben Folds or Adele, you will like the serious side of Marturano that he puts forth on Reflection.

He still loves his comical side though and believes he would make a great musical correspondent for TMZ, he is currently enjoying being an independent artist but is always open for a publishing / record deal and he is in talks with a production company about his own TV show where he spotlights the careers of celebrities and then sings ridiculous songs to them.

So really who is this guy, Paul Marturano? If you look back at his 20 year career, he has performed at Citizens Bank Park in Philadelphia, PA to a crowd of thousands playing a preshow concert and post show concert to the Billy Joel/Elton John top grossing Face to Face Tour in 2009. He sat in at the Iridium Jazz Club in New York City with the Legendary Les Paul, performed on many local and national television shows and has opened shows on the piano for many comedians such as Jackie the Jokeman Martling. He was also part of the team that earned a Daytime Emmy Award behind the scenes of the popular television show, Who Wants to be a Millionaire with Regis Philbin. He is a longtime voting member of The National Academy of Recording Arts and Sciences (NARAS) and is a co-founder of a non-profit Animal Rescue in Pennsylvania

Paul Marturano has been working hard in the entertainment industry. He has the heart of Mother Theresa mixed with Howard Stern’s sense of humor. He is known for his rock n roll piano style, his soothing ballads and also for his clever comedy songs. Whether he is performing solo, a dueling pianos show, a comedy show with The Hairy Aureolas or a classic rock show with his band, Bradley Cooper’s Left Arm, Paul Marturano’s live show is full of energy and is always a good time! When asked about his 20 year entertainment career Marturano said, Whether I am performing a serious song or doing raunchy musical comedy, it is all about the same thing …making a connection with people and having fun together!