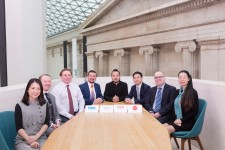 With a collection that tells the stories of cultures across the world, from the dawn of human history to the present, the British Museum attracts millions of visitors every year. It is particularly popular among Chinese visitors to London, many of whom visit the British Museum as part of their trip.

Hong Ying, General Manager of Alifish, Alibaba Group’s Licensing and Entertainment Business Unit, commented, “Alibaba are proud to be a partner of the British Museum with an online platform to directly engage new audiences and bring history cared for by the British Museum to the homes of the Chinese consumer. We will leverage our sophisticated data insights to connect manufacturers with the British Museum’s IP portfolio to develop authorised, branded products. The British Museum is the most visited attraction in the UK and our collaboration with the Museum allows hundreds of millions of Chinese consumers to experience and enjoy some of the most important milestones in human history.”

Alfilo Brands’ CEO, Yizan He, outlined his excitement at the deal saying, “In additional to British Museum online retail store developed with British Museum and Alibaba Group, Alfilo will also roll out brick and mortar stores in China, creating a perfect synergy between online and offline retailing for the British Museum in China.”

About the British Museum

Founded in 1753, the British Museum was the first national public museum in the world. From the outset, it was a museum of the world, for the world, and this idea still lies at the heart of the Museum’s mission today. The collection tells the stories of cultures across the world, from the dawn of human history, over two million years ago, to the present. Objects range from the earliest tools made by humans and treasures from the ancient world to more recent acquisitions from Africa, Oceania and the Americas, the Middle East, Asia and Europe, as well as the national collections of prints and drawings, and coins and medals. In addition to work in London, the Museum takes part in an extensive programme of loans and tours, both across the UK and throughout the world. Today the Museum is the most popular visitor attraction in the United Kingdom, receiving nearly 6.9 million visitors from across the world last year. www.britishmuseum.org

About the British Museum Licensing Programme

Alifish is an online copyright trading platform of Alibaba Group, offering online licensing match-making and business management services for IP owners and brand merchants. It provides a one-stop online licensing solution, including match-making powered by big data, sophisticated identification of potential licensees, licensing transaction, online licensing management, sales data tracking, and automatic royalty collection for its users. As of September 2016, IP owners use Alifish as a fast track to access over 100,000 selected brands and more than 400 million active buyers within the Alibaba Group ecosystem. At the same time, Alifish provides brand merchants access to an abundant supply of popular copyrighted items to enhance their merchandise and marketing strategies.

Launched in April 2008, Tmall.com (www.tmall.com) is dedicated to providing a premium shopping experience for increasingly sophisticated Chinese consumers in search of top-quality branded merchandise. A large number of international and Chinese brands and retailers have established storefronts on Tmall.com. According to iResearch, Tmall.com was China’s largest platform for brands and retailers in terms of monthly active users in 2015. Tmall.com is a business of Alibaba Group.