COCOA, Fla., July 15, 2019 (Newswire.com) - It was an alliance destined to be: NASA joining forces with Alan Parsons. Notwithstanding that Mike Myers’ alter ego Dr. Evil in The Spy Who Shagged Me had previously threatened to destroy the world from space using the Alan Parsons Project, NASA nevertheless threw caution to the wind and saw fit to team up with the multi-talented Grammy winning Producer, Engineer and Songwriter.

This past Saturday, the Alan Parsons Live Project played a free concert in Cocoa, FL in front of legions of enthusiastic fans gathered from around the country to kick off a week-long celebration of the 50th anniversary of NASA’s Apollo 11 mission. Highlights included the hits Eye in the Sky, Don’t Answer Me, Time and Games People Play along with One Note Symphony and other selections from his new album The Secret. Rick Armstrong, son of Neil Armstrong, the first man to set foot on the moon, was also on hand, opening the show with his own progressive rock band Edison’s Children.

In many ways, Parsons’ career reads like a fairy tale. His first job as an engineer was working with the Beatles on their Let It Be and Abbey Road sessions (yes, he was on the roof of Apple Studios for their final concert). From there, he would go on to become one of the most successful Producer/Engineers of all time, recording such world-class acts as Paul McCartney & Wings, Pink Floyd, The Hollies, Ambrosia, Al Stewart, and countless others before forming his own multi-platinum vehicle, The Alan Parsons Project.

Thus far, 2019 has turned out to be a banner year for Parsons. After 13 nominations, he finally won a Grammy for his classic album Eye in the Sky: 35th Anniversary Immersive Edition. This year also marked the release of Parsons’ first new album in 15 years called The Secret. And just last month, the Alan Parsons Live Project teamed up with the world-renowned Israel Philharmonic Orchestra for a pair of shows at the Charles Bronfman Auditorium in Tel Aviv. The historic performances were captured on video by the producing/directing team of Trinity Houston and David Minasian, and form the basis for Parsons' latest audio/visual exploration titled One Note Symphony.

Co-written by Parsons and fellow bandmates Todd Cooper and Tom Brooks, One Note Symphony tells of the universal sound the Earth makes as it travels through space, a phenomenon that science has confirmed. The video features the Alan Parsons Live Project band (which also includes PJ Olsson, Jeff Kollman, Dan Tracey, Guy Erez, and Danny Thompson) performing alongside the Israel Philharmonic. This powerful track is further enhanced by breathtaking visuals taken from Writer/Director Bobby Bala’s upcoming sci-fi film The Shipment, along with vintage Apollo footage provided by NASA. 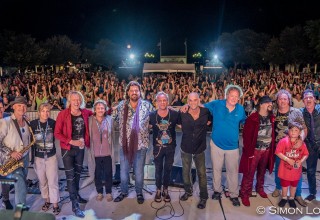 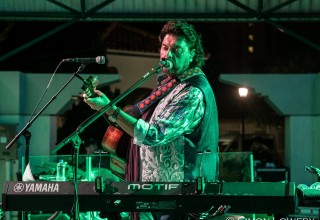