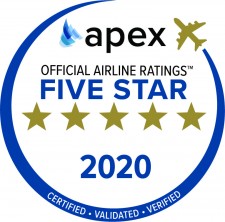 LOS ANGELES, September 11, 2019 (Newswire.com) - Top airlines from around the world gathered in Los Angeles tonight for the announcement of the industry’s most anticipated honor: the Official Airline Ratings™, the first airline rating program based solely on certified passenger feedback. APEX (the Airline Passenger Experience Association), the only non-profit membership trade association dedicated to improving the entire airline passenger experience, announced the airlines honored with four- and five-star Official Airline Ratings.

The APEX Official Airline Ratings™ were created based on neutral, third-party passenger feedback and insights gathered through APEX’s partnership with TripIt® from Concur®, the world’s highest-rated travel-organizing app. Using a five-star scale, more than one million flights were rated by passengers across nearly 600 airlines from around the world between July 1, 2018, and June 30, 2019. The APEX Official Airline Ratings™ were independently certified by a professional external auditing company.

“The Official Airline Ratings were designed by APEX, as one of the largest international airline associations in the world, to enable every air traveler that desired to rate airlines in a 100% verified, validated, and certified manner,” APEX/IFSA CEO Dr. Joe Leader stated. “More than 1.4 million flights were rated by passengers across nearly 600 airlines from around the world. Only a small, single-digit percentage of these airlines reached the prestigious APEX Four Star Airline status, while an even smaller number reached the monumental APEX Five Star Airline level. All of us at APEX take extraordinary pride in giving full power to airline passengers as the ultimate source of validated truth in airline ratings worldwide.”

For four decades, APEX has represented the world's leading airlines, suppliers and related companies and, with its members, continues to elevate the passenger experience. APEX airline members may participate in a program to receive exclusive access to the anonymous feedback provided by the airline’s passengers, which can be used to curate best practices and improve in-flight experiences for travelers.

The APEX/IFSA Award Ceremony, hosted by Brian Kelly, CEO and founder of The Points Guy, took place during APEX EXPO, the industry’s largest passenger experience event exclusive to experts and decision-makers committed to elevating the level of the worldwide airline passenger experience. The conference attracts more than 5,000 industry professionals, including representatives from more than 125 airlines, and showcases the most comprehensive display of airline-related technologies, products and services. APEX EXPO is once again co-located with International Flight Services Association (IFSA) EXPO and Aircraft Interiors Expo (AIX) Americas.

About The Airline Passenger Experience (APEX)

APEX encompasses a network of businesses and professionals that are committed to providing a world-class airline experience for passengers around the globe. As a non-profit, APEX reinvests all of its resources to better serve its members. Every day, APEX members evaluate the passenger experience through an influential community and are improving every aspect of the airline experience: from designing, building and installing seating, entertainment and communications systems on commercial aircraft, to airport lounges and inflight dining. For more than four decades, APEX has worked to strengthen the industry and enable business opportunities through education, innovation, networking and recognition. 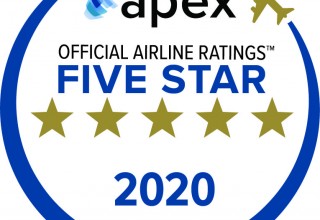 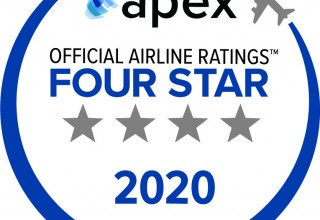 Strengthen the industry and enable business opportunities through education, innovation, networking and recognition.