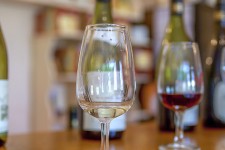 NAPA, Calif., August 22, 2018 (Newswire.com) - Since 2013, Philip Goodband, Master of Wine, has worked with Agrothermal Systems, originator of Thermaculture® technology, to compare test and control block wines. He has helped the company evaluate its technology and define the sensory differences wineries can expect when converting to this sustainable grape-growing method.

"What Thermaculture does to wine intensity, aroma, fruit flavors and mouth feel, especially the tannins, is just remarkable," says Goodband.

In late July, Goodband visited Jim Schultze at his Santa Cruz Mountains Windy Oaks Estate winery to compare Schultze's second year of heat-treated wines versus control block wines. He was accompanied by Art Tukker and Art Tukker Sr. of Tinwood Estate and Marty Fischer, CEO of Agrothermal, as additional tasters. The Tukkers, who are great fans of Pinot Noir, declared the three Thermaculture test Pinot Noir wines as "among the best we've ever tasted." According to Goodband, "Marty and I just looked at each other and nodded in agreement. We both can now blind-taste heat-treated and control block wines and know which is which by the sensory characteristics the technology creates. It's that dramatic. The heat-treated wines were just extraordinary in fruit flavor, tannins, length on the palate, color and even aroma." Schultze also explained, "These differences are even more impressive since the heat-treated blocks averaged a 22 percent increase in yield."

A few days earlier, the Tukkers and Fischer visited Foley Johnson Winery in Rutherford to blind-taste their second vintage (2017) of Thermaculture-treated wines. According to the Tukkers and Fischer, there was no doubt which was test and control. Says Fischer, "The heat-treated grapes just produced a more intense, aromatic, bolder-flavored wine with smoother but well-pronounced tannins."

Goodband reported, "Earlier this year, I had the opportunity to taste Petit Verdot and Petit Manseng at Barrel Oak Winery in Delaplane, Virginia, and some Chardonnay from Linden, California. These wines treated with Thermaculture protocols expressed the same characteristic sensory advantages over control block wines that we've seen for years now." Goodband continued, "I'm looking forward to future wines made with this technique as the Thermaculture phenomena finds more and more believers. I'm certainly one."

Agrothermal Systems is based in Napa, California, and is a dba of Lazo TPC Global Inc., a California corporation. Agrothermal has pioneered the use of Thermaculture as a means to improve wine quality, increase yields, reduce pesticide needs and manage crop damage from inclement weather events. The company holds patents on Thermal Pest Control and has patents pending on Thermal Plant Treatment for agricultural crops.