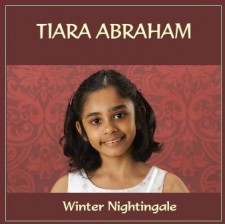 This pint-sized singer has the powerful pipes to turn heads and melt hearts. After performing twice at the prestigious Carnegie Hall, for international concerts, TV and radio shows, Abraham was asked if she had a CD available. The inspiration to record an album came from these repeated requests from her audience. In her debut album, Abraham takes you on a musical journey with her renditions of famous and rare holiday songs from Spain, Italy, Germany, France & England. She includes audience favorites like ‘My Favorite Things’ and ‘Ave Maria’. To give her album a universal appeal and global flair, Tiara includes different music genres and languages. Abraham adds her personal touch by arranging six of the nine songs. Against the odds, the album was produced and released in a short period of 3 weeks, just in time for the holiday shopping.

"Let's heal the world with love and music"

Abraham’s ‘Winter Nightingale’ album is receiving good reviews from listeners and fans. Some praises she received include “voice of an angel”, “blown away”, “gives me goose bumps”, “wow, truly gifted”, “OMG, who is she”, “amazing talent” and “she is amazing”.

Due to her passion for singing and seeing her older brother sing in a boys’ choir, 5-year-old Tiara often asked her parents for voice lessons. The young singer’s inborn talent surfaced around 6-years-old when she sang simple songs like ‘Happy Birthday’, nursery rhymes and the American National Anthem in vibrato, a style that is seen mostly among trained classical singers. At 7-years-old, Tiara began her vocal coaching and since then, she has been trained classically. She sings classical and other music genres like classical-crossover, traditional, Broadway, spiritual, pop and folk.

Apart from singing, Abraham enjoys learning foreign languages and cultures. She began on-campus college classes at seven. So far, she has completed 9 college semesters in Italian, Spanish, French, music and jazz dance with a 4.0 college GPA. Tiara became a member of the high IQ society Mensa at 4 and was inducted to the college honor society, Phi Theta Kappa at 9. She is a homeschooled sixth-grader. During her free time, Tiara can be found doing high school math, Sudoku puzzles, painting, sketching and watching foreign shows on YouTube.

Becoming the youngest recording artist to release an international music album in six languages, Abraham dreams of being a world famous singer and winning Grammys and hearts. She also dreams of working with some of her favorite singers and composers like Josh Groban, Renee Fleming, Sarah Brightman, David Foster, Hans Zimmer and AR Rahman. Tiara hopes to bring happiness and touch peoples’ lives with her singing and new album. “Let’s heal the world with love and music” – Tiara Abraham, 10-year-old recording artist.