ACT English scores show significant improvements over prior best scores, with 69% of students improving by an average of 3.17 points 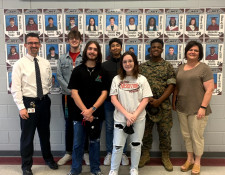 HORN LAKE, Miss., June 4, 2021 (Newswire.com) - Residents of Desoto County, Mississippi, have much to be proud of and the students at Horn Lake High School should be at the top of that list. Their recent ACT improvement results are definitely remarkable. Jumpstart Test Prep recently released ACT improvement results from Horn Lake, whose junior class used the Jumpstart English ACT prep to prepare for the state-administered February 2021 ACT® exam (American College Testing). Following completion of Jumpstart's complete ACT prep review, 69% of the students had an average ACT English score improvement of 3.17 points over their best prior attempt. Additionally, 48% of Horn Lake juniors achieved an average increase of 2.05 composite points over their prior best score.

Mazie Lamb, assistant principal at Horn Lake High, commented, "Jumpstart Test Prep provided a thorough and solid review of English grammar skills that students may not have used daily since middle school. It was a refresher course for students and a reminder of their basic grammar rules." Lamb continued, "The video modules were presented in a manner that the classroom facilitator did not have to be a master of English content to help the students through the program. Any teacher could facilitate the implementation of the Jumpstart program. We are very proud of the success of our students and we know that each of their futures is very bright."

Multiple Horn Lake students were recognized for their improvement results and shared their thoughts about the program. Graycie Pegram, who achieved an improvement of 10 points in her English subscore, increasing from a 20 to a 30, commented, "Jumpstart Test Prep made the difference for me because it reviewed a lot of material that I haven't seen in a long time and it made it easier to remember things I learned during middle school. Jumpstart used realistic example sentence problems to help me prepare for the ACT and that made a big difference." X'zorion Piere shared, "The biggest difference about Jumpstart was that it reminded me of rules I learned in middle school. It also helped me significantly with my time management skills. Jumpstart was most beneficial because it taught me exactly what the ACT would be like." Piere achieved an 82% improvement over his best prior English subscore, increasing from an 11 to a 20.

Jacob Brown, who reached a four-point improvement in English, increasing from a 30 to an outstanding score of 34, agreed with Piere. "Jumpstart helped give me a better familiarization with the ACT and definitely made a difference in my time management skills." Brown continued, "The questions were very realistic and seemed just like the ones that were on the ACT. Jumpstart is a very well-made review program and it made a difference in my scores." David Flores had significant improvements and increased from a 25 to a 32 in English. Flores said, "Jumpstart Test Prep helped me succeed because it gave me an overall refresh of everything I have ever learned in English." Dakota Ross achieved a 22 in English on his first ACT attempt. "Jumpstart is structured very well. The workbooks having fill-in-the-blank and being completed along with the video modules gave me a clear path to reaching success on the ACT."

Jumpstart Test Prep is an online review program based on over 50 years of work by Dot McClendon, a legendary educator and Mississippi's 19-year STAR teacher hall-of-fame inductee. "As a teacher at The Mississippi School of the Arts and several other schools during my career, I was able to help guide the preparation of students in person," said McClendon. "Now, through our online, on-demand video review, students in Horn Lake classrooms, as well as classrooms around the country, around the breakfast table or on the couch at home, are able to benefit from our approach."

All juniors at Horn Lake had access to the following resources: