This month, multi award-winning actress, voice over artist and fashion blogger, Vida Ghaffari, will once again grace the cover of prominent fashion magazine, FVM Global Magazine. Noted entrepreneurial guru, Lousine Karibian, founder and CEO of the World Networks, will also be on the cover. 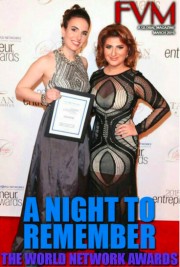 In this cover photo, these fashionistas were celebrating Ghaffari being bestowed with an Entrepreneur award for her various career endeavors by Karibian’s noted organization at the swanky Taglyan Complex in the heart of Hollywood. Ghaffari’s exquisite silver and taffeta gown was designed by Aidan Mattox.

FVM Global Magazine was founded by Faith Boutin and Murray Rosen, with Boutin serving as Managing Editor and Rosen as Editor-in-Chief. This cover signifies many future creative collaborations by Ghaffari, Karibian, and Boutin. Ghaffari first appeared on the cover of this esteemed magazine last fall.

About Lousine Karibian and the World Networks:

The World Networks is, as its name implies, an international networking group created and developed by its CEO Lousine Karibian in 2011. To its immense credit, this networking group has members from nearly every country on the globe. Karibian is also the CEO and founder of The Armenian American Network (TAAN), which she started in October, 2010. After she had founded TAAN, Karibian’s contacts from different backgrounds asked her, “Could you do this for our people as well?” And so was born The World Networks organization to bridge various ethnic and geographic communities. Not only is Lousine Karibian the entrepreneur’s entrepreneur, but she is also most certainly the net worker’s net worker, having built her company, The World Networks, into a truly global enterprise. She is also a terrific marketing person, as her clients will attest. More info at www.TheWorldNetworks.com

This well known fashion magazine is on the forefront of fashion on an international scale hence their title. They chose the dome of the cathedral in Florence as the symbol of their magazine because the architect who created this magnificent edifice, Brunelleschi, a mathematician and artist, was told it was impossible to build such a structure. Yet, here it stands, 600 years later and still a marvel, because Brunelleschi took on the challenge. His accomplishment changed art forever and helped bring in the Renaissance. With this achievement as their inspiration, the artistic team at FVM Global are not just building a magazine; they are building a cathedral to the arts, which prominently includes fashion. More info at http://fvmglobalmagazine.com/