Human rights advocates march to accomplish the goals of the Universal Declaration of Human Rights on its 70th anniversary. 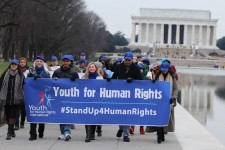 WASHINGTON, December 24, 2018 (Newswire.com) - As the new year approaches, human rights violations are a fact of life internationally: poverty, illiteracy, persecution of populations based on ethnic or religious differences, and more victims of human trafficking than during the peak of the slave trade of the 1880s and 90s. What's more, no country has a passing grade on its human rights "report card" for 2018.

To raise awareness on the subject of human rights, a group of young advocates gathered at Lincoln Memorial in Washington, D.C., to march in support of mandatory human rights education.

The march was organized by Youth for Human Rights International (YHRI) and was joined by members of Peace Lights and the Pan-African Diaspora Youth Association (PADYA).

The activity was part of a global movement in honor of the 70th Anniversary of the United Nations Universal Declaration of Human Rights (UDHR): If widely applied, the UDHR would end human rights abuses everywhere.

"The more awareness we bring to human rights, the more people will realize how little they know about them," said a fashion model from Somalia who participated in the walk. "If we are taught early on about the non-negotiable human rights listed in the UDHR, we will be encouraged to stand up for what we deserve and carry those habits into adulthood."

Youth for Human Rights D.C. and other national and international chapters have been champions on this campaign. Erica Rodgers, U.S. National Director of Youth for Human Rights International and organizer of the march said, "We stand here united as human rights defenders from around the world, determined to bring about freedom for all, starting with awareness of these basic human rights."

Youth for Human Rights International (YHRI) is a nonprofit organization whose mission is to inspire young people to become valuable advocates for tolerance and peace by educating them on the Universal Declaration of Human Rights. YHRI educational materials are used in classrooms, at conferences and international summits, and through art programs, concerts and interactive community events. Recent campaigns have included #KnowYour30—a campaign to increase awareness of the 30 human rights and how they are a part of everyday life. To learn more go to https://www.youthforhumanrights.org or watch a documentary on how Youth for Human Rights began. 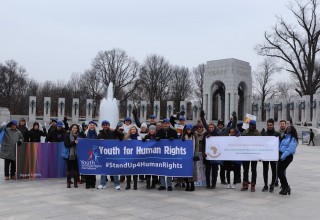 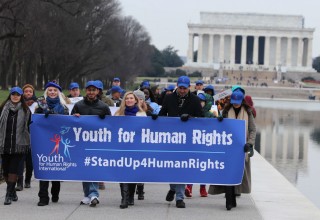 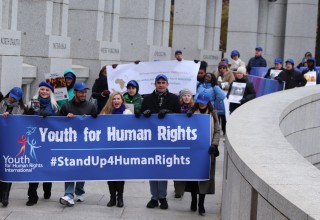