Ukrainian supporters to take part in the eighth annual vigil honoring fallen heroes of the 2013-14 Revolution of Dignity, and to thank and petition President Biden for a stronger stance in deterring Russia 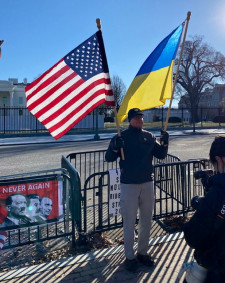 WASHINGTON, February 16, 2022 (Newswire.com) - United Help Ukraine (unitedhelpukraine.org) calling U.S. supporters of Ukraine: More than 300 supporters and friends of Ukraine from across the U.S. will gather at the Lincoln Memorial on Sunday, Feb. 20, at 2 p.m. to honor fallen Ukrainian heroes during the 2013-14 Revolution of Dignity and the thousands of fallen heroes of Russia's ongoing war against Ukraine. Following the vigil will be a rally and a peaceful march to the White House held in unison with members of the Belarusian, Georgian, Kazakh, and Baltic communities. The objectives of this event are to demand an end to Russia's war in Ukraine and the occupation of Crimea along with other territories in Donbas, eastern Ukraine — as well as the release of all Ukrainian citizens unjustly imprisoned by Russia, including Crimean Tatars.

The rally will thank President Biden for his support, and then specifically petition the Biden Administration to:

In response to Russia's 2014 invasion of Ukraine, the U.S. and its allies instituted economic sanctions. Unfortunately, these existing sanctions have not prevented Vladimir Putin from continuing this war, which has claimed more than 14,000 lives. Much stronger sanctions need to be prepared and publicly announced in order to act as a deterrent to further Russian invasion. The Ukrainian people and armed forces are firmly committed to defending themselves against any threat to their democracy and independence. However, to stand up to Russia, Ukraine needs continued support — particularly anti-armor systems, air defense and coastal defense. The U.S. recently provided Ukraine several hundred more Javelin anti-tank missiles and other military support, but many experts see this as only a partial deterrent against the troops, modern tanks and aircraft Russia has in place.

Ambassador William B. Taylor (former U.S. ambassador to Ukraine) and Vice President, Russia and Europe, United States Institute of Peace will be a keynote speaker.

Other invited speakers include senior U.S. diplomats and prominent members of the Ukrainian diaspora and community. 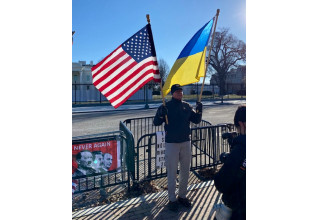 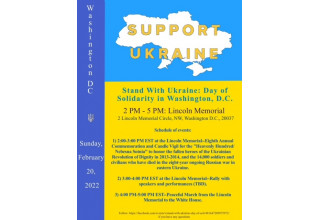