The activist and non-profit co-founder is ready and determined to make a powerful impact in U.S. Congress. 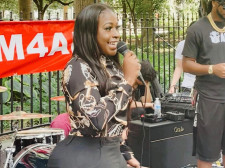 Queen Johnson is a community organizer, mutual aid giver, public servant, and human rights activist from Brooklyn, New York. She is a natural-born leader, acting as the Co-Founder and Vice President of a non-profit whose mission is to eradicate suffering by providing support and services to those in need.

"I was born and raised in Brooklyn, New York, by my mother, a working-class single woman who relied on government assistance to make ends meet," Queen says. "We lived in a public housing development in a low-income, high-crime area. I received my education through New York's public school system and began protesting at the age of 13, when an NYPD officer shot and killed my neighbor, unarmed 19-year-old Timothy Stansbury."

"This was a senseless loss that, unfortunately, is still all too common across America and this issue needs to be addressed," Queen continues. "Through my student-loan-funded college degree in Economic Analysis, I've learned how we can break the cycle of poverty in our community by creating and improving social services to those in need. There's no reason for citizens to continue becoming statistics and we must fight together to make our lives fundamentally better. My run for U.S. Congress is about protecting and putting the people of Brooklyn and Queens first. Together, we are bigger than the establishment."

As a candidate, Queen is running on a progressive platform, some of which is inspired by the ongoing global pandemic.

"Throughout the pandemic, we have seen the great people of Brooklyn and Queens band together to support our neighbors," Queen states. "This lengthy time of hardship has certainly been an immense challenge for our people. We've seen our loved ones die from this terrible disease - deaths that should never have happened. But, despite these tragedies, we have come together to help one another, show love to those in our community, and build strong relationships to carry us through until the end of the pandemic and beyond. This is my promise to you - to give you the resources, love, and support we all need to not only survive, but also to thrive."

"I firmly believe in racial, social and economic justice for everyone," she added. "It is time to elect a new generation of leaders who will fight to protect everyday people, and I am incredibly proud to lead the way and fight the fight for all everyday people."

For more information about Queen Johnson and her platform, please visit http://www.queenforcongress.com.

Queen Johnson is a native New Yorker from Brooklyn who has battled poverty, discrimination, racism, broken social support systems, and senseless violence throughout her entire life. Though these experiences may destroy others living in similar situations, Queen has made it her life mission to not only break the cycle for herself and her family, but for those in her community, too.