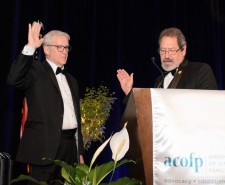 ARLINGTON HEIGHTS, Ill., April 3, 2019 (Newswire.com) - The American College of Osteopathic Family Physicians (ACOFP) is pleased to announce that Robert C. DeLuca, DO, FACOFP dist., was sworn in as president on Saturday, March 23, in Chicago during the ACOFP 56th Annual Convention and Scientific Seminars. Dr. DeLuca is an osteopathic family physician in Eastland, Texas. He is also an associate professor of family medicine at the University of North Texas Health Science Center’s Texas College of Osteopathic Medicine.

Dr. DeLuca was elected as governor on the ACOFP Board of Governors in March 2012, served as chair of the Convention and Site Committee, participated in several other committees and has been an ACOFP member since 1986. He is a past president of the Texas Society of the ACOFP and was named its Family Practice Physician of the Year in 2005. He has won several awards, including the Sam Buchanon Sr. Memorial Service Outstanding Graduating Clinician Award, the Outstanding Preceptor Award, the Dean’s Distinguished Service Award and the Community Service Award from Texas College of Osteopathic Medicine.

“I am excited to begin my term as president with the goals of increased engagement and open communications with all members, committees and affiliates,” said DeLuca. “ACOFP will continue to encourage students and residents to follow the osteopathic pathway of education and certification. ACOFP will also advocate for members by highlighting how skills in osteopathic manipulative treatments can provide an essential element to decreasing the need for opioid pain medication, reduce the need for extensive imaging and improve patients’ overall health and mobility. This helps lessen the costs of consultation by expanding our abilities to treat the patient in our own clinics and benefits everyone.”