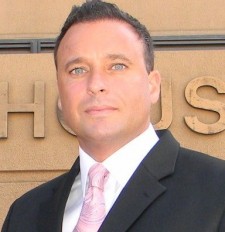 San Francisco, California, March 31, 2017 (Newswire.com) - ​​​​​​​Darren Chaker was on probation for a white collar crime. It was alleged he defamed a police officer and put in jail. After spending months in jail, Mr. Chaker's imprisonment was found unconstitutional. Mr. Chaker was supported by the ACLU of San Diego, Electronic Frontier Foundation, Cato Institute, First Amendment Coalition, and the University of Florida's Marion B. Brechner First Amendment Project. The amicus brief was prepared by the Washington D.C. office of Wilmer Hale.

In this instance Nevada Attorney General Investigator Leesa Fazal of Las Vegas made multiple reports about the blog to her own agency, Las Vegas Metro Police Department, and FBI. None of them took any action to file charges. Next, Ms. Fazal contacted Mr. Chaker's probation officer who promptly sought to place Mr. Chaker in jail. Typically people are sued for defamation in civil court. California's criminal defamation law was found unconstitutional in Eberele v. Municipal Court, 55 Cal. App. 3d 426.

"The 4.2 million people on probation in the United States are not second class citizens when it comes to First Amendment rights." Darren Chaker

In this case, the Ninth Circuit, Case. No. 15-50138/ No. 15-50193, found in its opinion, “Chaker’s blog post, which claimed that former police investigator Leesa Fazal “was forced out of the Las Vegas Metro Police Department,” does not qualify as harassment.” The court continued to state, “The government also failed to prove that Chaker’s blog post satisfied the elements of defamation, including falsity and actual malice. See N.Y. Times Co. v. Sullivan, 376 U.S. 254 279–80 (1964).”

The Human Rights Defense Center published an article saying in part, “The First Amendment protects the right of everyone to use the Internet to criticize government officials – including people on supervised release from prison,” noted Electronic Frontier Foundation (EFF) senior staff attorney Adam Schwartz.

As reported by the Cato Institute in a post appeal article, “Chaker notes on his personal blog that he is “only one of 4,708,100 people are on probation or parole.” Millions of individuals’ political speech could have been swept up under the precedent set by the lower court’s outrageous decision…. The decision in Chaker v. United States is thus a victory for First Amendment advocates and political activists everywhere. It protects the rights of even the most downtrodden and implicitly applies the correct defamation standard to political speech aimed at public officials.”

During oral argument on June 10, 2016, it was conceded the speech was non-criminal. The Ninth Circuits YouTube Channel, shows oral argument where the former chief judge did not appear happy about restricting non-criminal speech:

23:16 Judge Kozinski to AUSA - “You managed to bamboozle…I mean the United States, managed to fool the   district judge imposing the condition…”;

Jailing a blogger for non-criminal speech for criticizing government is precisely what sets America apart from oppressive regimes who seek to control the media and thoughts of its citizens by placing people in jail. In this instance, the government lost, but sets a dangerous precedent of how resources can be used to silence critics.

Additional information may be found at, http://darrenchaker.com/darren-chaker-wins-appeal/