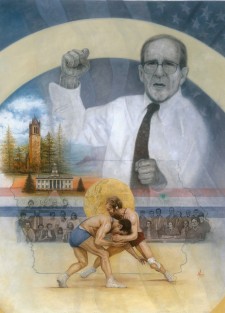 RED BANK, N.J., October 25, 2018 (Newswire.com) - An original oil painting and reproductions memorializing the career and achievements of U.S. Olympic Gold Medal wrestler Dan Gable have been created by established painter Mike Kupka. "The Art of the Fight" pays tribute to Iowa high school, collegiate and Olympic champion wrestler Dan Gable. Gable's gold medal, astonishing record of 181-1 and his coaching career are the stuff legends are made of.

The painting depicts Gable's dramatic winning match at the 1972 Munich Olympic Games, which the Soviets wanted to win by any means. It also digs deeply into Coach Gable's life. The work symbolizes his love for his home state of Iowa where the National Wrestling Hall of Fame Dan Gable Museum is located, his love of the sport, his family, and the mentors and coaches who guided him along the way to great success. Mike Kupka's painting also includes iconic locations from Gable's athletic career, his Olympic gold medal and the wrestling mat where the action took place.

Coach Dan Gable on what this painting means to him: "This piece of art covers my whole life. There is so much inspiration within this work that I personally call it a masterpiece. There's a great story behind each one of the images artist Mike Kupka has so brilliantly captured. It reflects both my lifetime and my legacy. I hope it will inspire people for a long time to come."

Mike Kupka on the inspiration to paint Dan Gable: "I admire Dan's perseverance, drive, focus and his riveting attention to detail, which is something I put in my paintings. The perfection that he strives for on the wrestling mat is what I strive for on the canvas. When it leaves my easel, it has to be the way I want it. It's a reflection of me."

For more information or to book interviews with Coach Dan Gable or Mike Kupka: