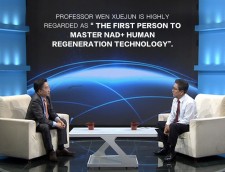 RICHMOND, Va., August 7, 2019 (Newswire.com) - Recently, the CCTV “Age of Impact” column has invited Wen Xuejun, Academician of the American Institute for Medical and Biological Engineering (AIMBE), Chief Tenured Professor of Clemson University (the cradle of worldwide biomaterial research) and VCU School of Medicine/Virginia Commonwealth University, Distinguished Chair Professor of Tongji University, as well as Distinguished Professor of Shanghai Jiao Tong University and Ludong University, to conduct a dialogue with the famous host Shui Junyi on the topic of regenerative medicine, another far-reaching medical revolution after medicine and surgical treatment.

Academician Wen Xuejun has engaged in regenerative medicine and bioengineering research for years. Back in 2003, Wen received his doctorate in bioengineering from the University of Utah and established the Clemson-MUSC Bioengineering Program. In 2012, Wen was elected as the Academician of AIMBE, the world's most influential academic organization in the field of bioengineering. So far, he has led his research team to develop more than 130 core technologies. Moreover, they were the first to apply biomaterials for the regeneration of functional brain tissues, which was a revolutionary research achievement and reported by many international mainstream media such as NBC/ABC, Discovery and BBC.

Multiple challenges are to be overcome in the process of promoting the widespread application of regenerative medicine in anti-aging. For instance, how to put Nobel laureates’ NAD+ anti-aging theories into scientific research use to realize their true value.

The key to transforming scientific research achievements into clinical treatment and prevention lies in bold innovation. In the view of Wen Xuejun, innovation requires courage, which however does not mean any mindless ideas, but collecting adequate experimental data for the current research, upon which a reasonable prediction is made.

As the influence of anti-aging research radiates to pharmaceutical and production industries, Wen Xuejun combined the section of production, study, research and medicine to innovate the system and to develop NOVIS vita, which was born out of the first international platform for the transformation of scientific research achievements in regenerative medicine. The research has greatly contributed to the effective transformation of Nobel Prize anti-aging achievements and has taken the most practical step to “extend” the productization of regenerative medicine.

One can hardly imagine the huge sensation in the industry when Academician Wen released the anti-aging technology transformation achievement NOVIS. As Wen mentioned, the key innovation concerned is to make use of regenerative medicine and bioengineering to modify NAD+ precursors, so as to guarantee their cross-membrane movement after smoothly entering the blood and exert their influence to the fullest. This achievement helps to prevent the aging of the organism and the concurrence of various diseases caused by aging.

In consequence, Wen Xuejun is highly-praised as “the first person to master NAD+ human regeneration effect”, and behind these legendary achievements and honors, there is a scientist's persistence and perseverance.

Shaanxi, the Ancient Millennium Capital is Growing Into a Web Celebrity in the Tourist Destinations
Press Release Agency - Jan 5, 2020
Newswire