About 45 Million Americans Aren't Getting Speeds They Pay For

Allconnect.com Evaluated Months of Data to Determine the Internet Speeds People are Getting 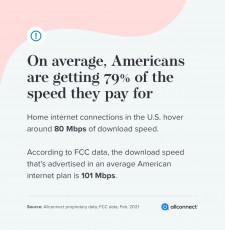 "Our team spent weeks reviewing and analyzing internet speed data gathered over several months. By reviewing download speeds recorded in our system and matching those speeds to their internet type, we are able to determine whether the speeds recorded match the average advertised speed by the providers offering the internet service," said Robin Layton, editor at Allconnect.com.

The report revealed there is a disparity between the speeds people are getting versus the speeds they signed up for. Much of the data showed the type of internet a person has affects how different their speeds may be compared to the advertised speeds.

"Having dependable internet is crucial right now, and with so many options available, it is important to have information like this to help consumers make the right choice for their needs. Being able to compare various aspects of internet service like reliability and speed helps make those decisions a little easier," Layton adds.

The full report and methodology can be found here:

About Allconnect.com: Allconnect is a free resource that simplifies how you shop for home services and is all about connecting millions of people to the best deals on internet, TV and more. Visit allconnect.com to learn more.

Almost Half of Americans 55+ Don't Know Their Internet Speeds and a Quarter of Those Are Dissatisfied With Their Speeds
Survey Also Revealed That Only One-Fourth of Americans Know the Internet Speeds They Need
Allconnect - Jun 25, 2021
Allconnect.com Names Best Towns for Digital Nomads
Allconnect.com Evaluated Over 29,000 Locations to Determine Best Vacation Cities and Towns
Allconnect - May 11, 2021
Wireless Hotspots Reign Supreme for Remote Workers, Offering Double the Advertised Speeds
Allconnect.com Compared Actual and Advertised Speeds for Satellite, Public Wi-Fi, and Wireless Hotspots to Determine the Best Connection Type
Allconnect - Mar 16, 2021