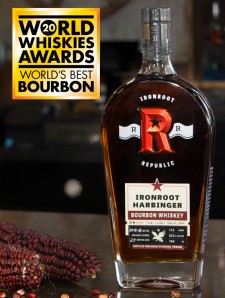 Following “World's Best Corn Whisky” wins in 2017 and 2019, Ironroot achieved the most coveted award for American whiskey producers in true David versus Goliath fashion. The Harbinger Straight Bourbon first competed against other bourbons from outside Kentucky and was named “Best Non-Kentucky Bourbon” before going on to compete against the best Bourbon from Kentucky. The small craft producer from small-town Texas went on to win the title of “World's Best Bourbon.” Ironroot Republic’s Head Distiller, Jonathan Likarish, was also a finalist for Master Distiller/Master Blender of the year.

“This is an award that we were not even sure was achievable,” said Head Distiller Jonathan Likarish. “It is humbling and almost overwhelming to be acknowledged at such a high level in the industry by people who we hold in high regard. Our hard-working team and families make this possible and we are just thankful to be able to go to work every day.”

The World Whiskies Awards are one of the most highly regarded whiskey competitions in the world and are judged by a panel of “leading journalists, specialist drinks retailers, and industry experts.”

As the name suggests, Ironroot Republic is an unexpected amalgam of people and talents, who create spirits that are sophisticated and modern while paying tribute to their roots. Ironroot is family owned and operated by the Likarish Brothers, Jonathan and Robert, and their Mother, Marcia – The Mother of Texas Whiskey.

Located in Denison, Texas, Ironroot’s whiskey-making philosophy is heavily influenced by the history of their town. In the late 1800s, a resident of Denison, T.V. Munson, famously saved the French wine industry from the phylloxera disease with the “iron” grape roots of Texas and forever linked the cities of Cognac, France and Denison. Ironroot whiskeys are distinctive because they employ traditional French Brandy techniques using a variety of local and heirloom corns to create finessed spirits. Ironroot believes in a GRAIN to GLASS philosophy. Their products are made from scratch, with an emphasis on using fresh, local, and non-GMO ingredients. Ironroot supports their local farmers and showcases their hard work by mashing GRAIN, fermenting, distilling, barrel-aging, and bottling in GLASS, all in Denison, Texas.