What happens when one is successful, year-over-year, in increasing end user bandwidth? One gets a core network capacity challenge. Commissioner Brian Thompson lays out a vision for not only beefing up national core network capacity, but also lowering the barrier to entry for new service providers. 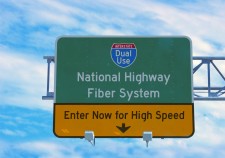 Washington, D.C., December 6, 2016 (Newswire.com) - ​​​​​​​​​The current approach to network deployment is illogical and highly inefficient. It involves multiple construction projects from multiple owners through the same right-of-ways, jeopardizing network reliability, creating additional security risks, and slowing down the extension of high-speed broadband connectivity to many Americans. The United States is not currently in the top 10 countries with respect to broadband deployment or speed, and the current approach certainly won’t elevate that position.

Without question, one of America’s greatest accomplishments of the 20th century was the creation of the National Highway System (NHS), which effectively brought the nation together and sparked unparalleled economic growth and development. It is open to all, operates on a non-discriminatory basis and connects Americans for commerce and pleasure. Now, a new kind of public roadway is needed – one that provides the backbone for the communications needs of the country in the same manner that the NHS does for the country’s transportation needs.

The United States is not currently in the top 10 countries with respect to broadband deployment or speed, and the current approach certainly won't elevate that position.

Based on a concept similar to the NHS, a National Highway Fiber System (NHFS) would be built and offer ubiquitous and affordable access to both dark fiber and empty conduit using the right-of-ways of the highways that comprise the NHS, which come within 5 miles of 90 percent of the U.S. population. Thus, the NHFS would replicate the footprint of the NHS but with dark fiber and conduit available for public and private use to meet the broadband needs of the country. With apologies to Robert Frost, sometimes taking the road more traveled makes sense.

The goal of the NHFS would be to deploy dark fiber and empty conduits on a cost-effective basis and to make them available to anyone who wishes to use them. The operational and funding models would ensure that the infrastructure could be leased to any public or private entity at a low price, while still covering operations and maintenance costs.  If the NHFS were established as a public company, it would be structured to provide a regulated return to public shareholders.

Just as the NHS brings transportation benefits to much of rural America, the NHFS would significantly improve the on-line capabilities of those that are currently underserved or unconnected.  As mentioned earlier, the NHS comes within 5 miles of 90 percent of the U.S. population, and bringing fiber pipes this close to 90 percent of the population would certainly be a big step in conquering the “digital divide” that currently separates many rural Americans from their urban counterparts.

The capital budget for this effort is estimated at approximately $35 billion over a 10-year build period[1], covering the deployment of dark fiber plus additional, empty conduits along the 160,000 miles of the NHS.  It also includes the construction of access “plazas” or service centers at regeneration sites, approximately every 30 to 60 miles.

While it is certainly possible for the Federal Government to fully finance and own the NHFS, there are viable and proven alternatives, such as the public-private partnerships for similar infrastructures in Australia[2], Singapore[3], Canada[4], or the Netherlands[5]. For instance, the NHFS could be formed as a publicly traded, private company with the Federal Government acting as the project catalyst, providing initial loan guarantees, access to the necessary rights-of-way, and revenues as the anchor tenant. Capital needs for the project could be raised via a public stock offering in a fashion similar to the implementation of the Satellite Act of 1962.

The communications system of the United States was the envy of the world for many years, and most would admit, though perhaps grudgingly, that the rapid expansion of the telephone network was at least in part due to the monopoly power of AT&T.  It was able to concentrate on bringing basic service to each citizen without having to worry about competitors.

While no one is suggesting a return to those monopoly days, it does make sense to allow communication companies to concentrate on competing in the areas of services and reliability, and eliminate the need to worry about basic transport.  The NHS does this for transportation and the NHFS can do this for communications.  The current system often sees competitors building parallel fiber routes that duplicate each other. This leads to inefficiency, wasted effort, and often, confusion by the end customer.

President Dwight D. Eisenhower didn’t conceive the Interstate System, but his support led to enactment of the Federal-Aid Highway Act of 1956, which established the program for funding and building it.  In 1955 he stated, “Our unity as a nation is sustained by free communication of thought and by easy transportation of people and goods.  The ceaseless flow of information throughout the Republic is matched by individual and commercial movement over a vast system of interconnected highways crisscrossing the country and joining at our national borders with friendly neighbors to the north and south.  Together, the united forces of our communication and transportation systems are dynamic elements in the very name we bear—United States.  Without them, we would be a mere alliance of many separate parts.”

Those words ring true even today, and establishing an Interstate National Highway Fiber System is the next step in furthering the flow of information about which he spoke.

The leaders of many countries are wrestling with the need to expand their core information infrastructure.  The concept outlined here should be given full consideration as a means of economically expanding America’s infrastructure while also promoting competition, which ultimately benefits our citizens and the country as a whole.  To quickly and successfully bridge the digital divide and bring the benefits of broadband access to all Americans, the time to act is now.  It cannot wait.

GIIC is an independent, non-governmental initiative involving leaders from developing as well as industrialized countries.

GIIC Commissioner Robert Nichols - Conquering the Last Mile
The Global Information Infrastructure Commission (GIIC) is an independent, non-governmental initiative involving information and communications related industry leaders from developing, as well as industrialized, countries. The GIIC was initiated from G7 and World Bank concerns in the mid-1990s regarding the economic impact of a digital divide.
Global Information Infrastructure Commission - Feb 17, 2017

Wanted: A Down to Earth Internet
The world has a great challenge on its hands: feeding a growing population with limited farmlands. Global Information Infrastructure Commissioner Howard Janzen urges forethought and action to network farms with advanced technologies that will increase yields.
Global Information Infrastructure Commission - Dec 21, 2016