by Jim DeLorenzo for the Penn Mutual Collegiate Rugby Championship 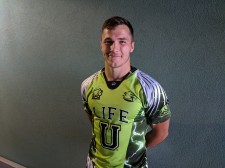 Philadelphia, Pennsylvania, June 3, 2017 (Newswire.com) - The speedy captain of the Life University Running Eagles is, of course, named Harley Davidson.  And even he admits that the raised eyebrows and questions of “Really?” are never-ending, even in college.  It seems every new professor he encounters has the same refrain.

Davidson is used to it – and graceful in responding to it.  “My dad always wanted to name one his children Harley,” said the senior in Exercise Science.  “At first, my mom didn’t like it.  Dad had to convince my mom.”

His older brother, named Rich after their father, introduced him to the sport of rugby.  “My brother played, he’s a year-and-a-half older than me.  I was all about football and wrestling in high school.  Then I fell in love with rugby, and started playing in high school and never stopped.”

A native of Boise, Idaho, Davidson played rugby at Capital High School before choosing Life – a small NAIA school in the Atlanta suburbs that has made the sport its claim to fame.

“I originally wanted to go out West for school and play club rugby, but my friends and family made me realize I have my whole life to play club rugby, get a good education now and still play great rugby.

Davidson and his Life teammates are competing in this weekend’s Penn Mutual Collegiate Rugby Championship, in suburban Philadelphia, Pennsylvania.  It’s Davidson’s fourth and final visit to the end-of-year National Championship, with one last shot at winning the coveted Pete Dawkins Trophy for the title team.

“This year, the competition is phenomenal,” noted Davidson.  “It’s a lot more competitive, every pool is tough.  It’s great to see this event, and the sport of rugby, growing in the United States like this.”

Like many young standouts in the U.S., Davidson admits to his aspirations to play on the USA Rugby 7s team and potentially get to the 2020 Olympics.  For now, the Golden Eagles trailblazer is focused on the Penn Mutual CRC, and graduation, with aspirations of becoming a physical therapist.

“I have a few more classes and  a quarter semester to finish, and then I plan on moving to Colorado, continuing my training, and try out for the Glendale Rugby club,” Davidson said.  “Now, I just want to enjoy my last year with Life,  and leave a good legacy at the school.”