A New Narrative is Needed to Combat the Sharp Rise in Teen Suicide, Drug Overdose and Depression 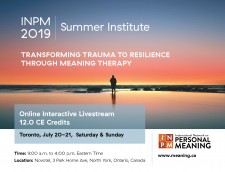 TORONTO, April 1, 2019 (Newswire.com) - In response to the recent mental health crisis, Paul Wong, Clinical Psychologist and President of the International Network on Personal Meaning, offers two Meaning Therapy Workshops to equip mental health workers with the necessary skills to help people meet their basic needs for meaning as an antidote to mental disorders.

On April 12, at Ottawa’s Royal Mental Health Center, Wong focuses on integrating healing and personal growth through meaning. In Toronto in July 20-21, the focus is on transforming trauma to resilience through Meaning Therapy.

Suicide rates in the U.S. have increased nearly 30 percent in less than 20 years, according to the Centers for Disease Control and prevention. Suicide among ages 10-24 was the second leading cause of death (2016 CDC WISQARS). These heart-wrenching statistics have received intense media coverage and national debates regarding the causes and solutions.

CDC pointed out in its report that more than half of the suicide deaths in the U.S. did not have a known diagnosed mental disorder. “The medical model of having more psychiatrists, more diagnoses, more medications has not stopped the rising rate of teen death by suicide and overdose,” said Wong. “We need to search more broadly for the underlying cultural, social and psychological factors that contribute to suicide, overdose and depression.”

Wong also points out that Western culture’s glorifying of happiness and success may have the opposite effect of increasing depression, as evidenced by research in Brock Bastian’s book The Other Side of Happiness: Embracing a More Fearless Approach to Living. Conforming to the social pressure of pursuing happiness and avoiding pain has created a cuddled generation, vulnerable to hardships and mental illness.

In contrast, the message of meaning therapy is that life is full of suffering and injustice. We need to give up our unrealistic expectations and face life with tragic optimism and struggle for a better future with courage. Wong emphasizes that “paradoxically, such a realistic life orientation actually increases our capacity for resilience and happiness.”

Our culture of pursuing happiness has unwittingly resulted in the “unhappiness epidemic” because of spending too much time on social media and smartphones, according to research by Twenge. In a national study, she found that “teens who spent more than five hours a day online were twice as likely to be unhappy as those who spent less than an hour a day.”

“To avoid the happiness trap, we need to have a realistic life orientation and focus on what really matters in life, such as developing loving relationships, making personal sacrifices for something bigger than oneself, and having faith in a higher power or transcendental values, all protective factors against depression and suicide,” said Wong.

Wong also conducts Meaningful Living Meetups for the community. His vision is to equip people with the life skills to cope with stress, develop resilience and live a meaningful, fulfilling life. Many of these skills are summarized in Wong’s recent book, Inspirations for Difficult Times. He hopes that his book will help young people and their parents develop a more realistic but optimistic orientation towards life.

To contact Wong for an interview, email drpaulwong@gmail.com or visit www.drpaulwong.com.

INPM is a learned society dedicated to the advancement of meaning-focused research and applications. It was federally incorporated as a non-profit in Canada.