A Groundbreaking New Bible Translation Was Released This Year, and It Charts a Different Course 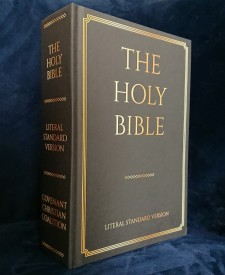 DALLAS, August 20, 2020 (Newswire.com) - ​The recently published LSV Bible from Covenant Press has charted a fundamentally different course than the 20th and 21st century Critical Text translations. The new Literal Standard Version is based on the Textus Receptus, in line with the earlier Geneva Bible and King James. It's a major revision of the literal translation by Robert Young, known popularly as Young's Literal Translation, with a relationship to Young's that is similar to that between the English Standard Version and the Revised Standard Version or the NKJV and MEV to the King James.

Readers will experience a translation that is even further along the formal equivalence spectrum than Young's—in fact, the most literal English translation ever made—yet is much easier to read, given that the LSV translation is written in modern English. For students of the Bible searching for a faithful translation like the King James that is literal, à la Young's or the NASB, but is written in the common tongue, they may have finally found what they've been looking for.

The LSV combines the strengths of many of the most excellent translations, including the literal nature of Young's, the usage of the Name of God as found in translations such as the HCSB and World English Bible, and the capitalization of nouns and pronouns that clearly refer to God, Christ, or the Holy Spirit, as is the case in the NKJV. The LSV also follows the same path laid out by Young's in translating verbs in the most accurate way possible, recognizing the aspectual or perfect/imperfect nature of biblical Hebrew, as defended by scholars like Wilhelm Gesenius, Heinrich Ewald, and Samuel Lee.

While not necessarily as smooth as dynamic equivalence translations used in daily devotionals that incorporate paraphrase, readers of the LSV will get the closest glimpse possible into the meaning of the Hebrew, Aramaic, and Greek text of the Bible, without resorting to an interlinear resource or the original languages themselves. The text is elegant and powerful, allowing the reader to experience Scripture in a much deeper and more accurate way. In addition, by utilizing justified text-blocks similar to the original autographs, as well as caesura marks in poetry, the LSV is the easiest English translation to publish, share, and distribute ever made—the first Bible translation formatted especially for the digital era.