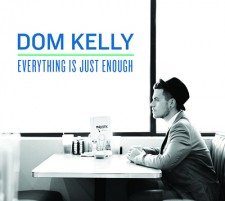 An accomplished musician and songwriter, Kelly formed A Fragile Tomorrow in 2003 with identical triplet brother Sean and younger brother Brendan. Five albums, a handful of Grammy pre-nominations and an Independent Music Award later, Kelly now steps out from behind the drum kit and unveils his first solo effort, Everything Is Just Enough. Produced and engineered by Brendan Kelly, the songs often echo the cool indie charm of Duncan Sheik while incorporating the sparkling, sinuous harmonies of Simon & Garfunkel. But he had a little assistance too, as Kelly reveals:

I can say that making this album has been a part of my process to face my fears.

“I had wanted to do a solo album for a long time,” Kelly says, “ but my insecurities around songwriting held me back. Finally, I decided to jump into it, and I called all the friends I ever wanted to record with and asked them to help me out.”

Everything Is Just Enough is a pop-folk exploration that shimmers with reflectiveness and emotional honesty. After having spent the past 7 years in recovery, Kelly was ready to come to terms with some of the other impactful events that were happening in his life. Within the music, he opens up about many complex situations that he was dealing with that involved family, mortality, security and the drawn-out pain of weathering these issues. He explains how the album title and songs came to be from these experiences:

“Watching my mom on her deathbed, ending a relationship with someone I loved very much, and losing my grandfather very suddenly all pushed me to reflect upon the grieving process, the meaning of life, and those existential questions we all ask ourselves. It was only fitting that Everything Is Just Enough would become the title, as it sums up the meaning behind the album as a whole.”

The title was taken from a lyric in his song “I’ll Whisper In Your Ear”, written as a letter to his mother as she faces the realities of her terminal illness while "12" (featuring Emily Saliers from Grammy-winning duo Indigo Girls) delves into the depths of addiction, which he states is the single most important thing in his life today. Kelly is forthright about the inner work that it took for him to craft these songs, stating “I can say that making this album has been a part of my process to face my fears.”

Confronting one's demons can also have a positive upside, as Kelly demonstrates by weaving a golden thread of liberation throughout the album, offering hope in an all-too frequent world of despair. The politically charged song “Pie” takes the listener through those personal and even cultural feelings with clever, near-ironic lyrics. “Hailey’s Gone” is a haunting, inspiring tune that was sparked by a transgender fan whose transition story was publicly shared on social media during the process. Kelly followed along and was so moved by his bravery, he wrote the track and shared it with Hailey – now Ben. One of Kelly's all-time favorite songs, Townes Van Zandt's "If I Needed You", is performed with Lucy Wainwright Roche in a crystalline duet of ethereal beauty. An array of luminary guests join Kelly at his musical table, including Chris Trapper (Push Stars), Sarah Bettens (K’s Choice), Dorris Muramatsu (Girlyman) and his brother/A Fragile Tomorrow bandmate Sean Kelly.

Only in his mid-20’s, Kelly has already been through plenty to feed the fodder of his songwriting. Born as triplets, siblings Dom and Sean saw their other fraternal triplet pass away at a very young age. Having also suffered from Cerebral Palsy in varying degrees, the two boys and their younger brother Brendan turned to music early on for solace and formed A Fragile Tomorrow, named as a tribute to their lost brother. Bass player Shaun Rhoades later came on board and the group toured throughout their teens with bands such as The Bangles, Indigo Girls, Matthew Sweet, Antigone Rising, Toad the Wet Sprocket and K’s Choice.

Expressing a musicality and depth beyond their years, the Kellys additionally have a pedigreed heritage. The family's late cousin Richard Farina was married to Mimi Farina (née Baez), the sister of folk icon Joan Baez. In 2016, the band came full circle and collaborated with Baez to perform a song written by Richard and Mimi, "One Way Ticket", garnering the "Best Cover Song" award at the 2016 Independent Music Awards.

PRE-ORDER EVERYTHING IS JUST ENOUGH

"Great songs, a strong image, and a strong presence...impossible to ignore"
--Babysue.com

ABOUT DOM KELLY: As the drummer, vocalist and co-founding member of the power-pop band A Fragile Tomorrow, Dom Kelly has been performing in various artistic mediums since the age of five. Having formed the band in 2003 when he was just 12 years old alongside brothers Sean and Brendan, A Fragile Tomorrow has released 5 studio albums including 2015’s Make Me Over (MPress Records) which garnered them a number of Grammy pre-nominations as well as an Independent Music Award for their collaboration with folk icon Joan Baez. The band toured internationally with artists like Indigo Girls, The Bangles, Toad the Wet Sprocket, Matthew Sweet, K’s Choice, and Antigone Rising while building their loyal fanbase and earning critically-acclaimed reviews. Kelly and his brother Sean are two of triplets born with varying degrees of Cerebral Palsy. Their triplet brother Paul passed away when very young, which ultimately inspired them to pursue music as a career and form AFT, which is named in tribute to him. After years spent behind the drumkit with his band (and brothers), Kelly is now ready to be front and center with his solo debut album, Everything Is Just Enough. He'll be touring behind the release for the remainder of 2017 and is available for press and bookings.