A. E. Fortin's New Book 'The Fairy Rose in America' is a Riveting Story of Love, Adventure, and Mysticism 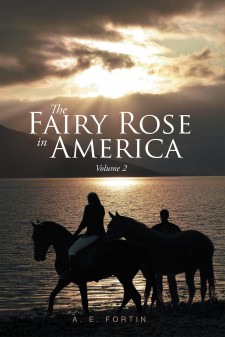 NEW YORK, November 14, 2019 (Newswire.com) - A. E. Fortin, a former machine operator at Parker and a passionate writer, has completed her most recent book “The Fairy Rose in America”:  an enthralling narrative about two people and the magic that binds them and those close to them.

Fortin writes, “In the first book, ‘The Magic Fairy Rose,’ it started in Scotland with Thomas MacGregor and Eleanor Heart. This book was a love story. However, it was much more. Thomas had to find out what happened to his brothers. His oldest brother had told Thomas someone was trying to stop him. His name was Marcos, and he was evil. Learn why this man went after Thomas’ family. You would have to read the first volume to know what he did. Thomas’ father had asked him to bring his mother a rosebush home. It was a tradition that the MacGregor men always brought a rose home for her. Discover what happened with the rosebush that he found.

In 1850, the Scottish were leaving the Highlands. Many of them were kicked off their lands with no place to go. They got on a ship heading to America. Learn how they brought three rosebushes to America without carrying them. Tonight, there would be two ghosts visiting Alexander MacGregor and Neil Heart. It took a hundred years before the magic rose was brought to America. Garret Heart made a promise. He said that one of his family members would always be there to protect a MacGregor. Why, you say? Meghalaya, the storyteller, she told Thomas that an evil man would be coming after the next Thomas and Eleanor. Their mothers would call them Tom and Ellen. Discover why their fathers became Navy SEALs. Why were Tom and Ellen sent to a school in the Highlands of Scotland? Discover the mystery of why their memories were messed with. Who ordered one of their fathers to take their names from them then to be put in a school that changed their names? So Tom became Mic, and Ellen became Angel. Remember, there would be a family member of Garret’s to watch over them. Don’t miss the twist at the end of the story.

See what is next in Volume 3.”

Published by Fulton Books, A. E. Fortin’s book is a spine-chilling masterpiece that shows a battle between good and evil that spans through generations and families.

This book depicts a wonderful journey of hope, compassion, and courage in facing the past to conquer the present.

Readers who wish to experience this engrossing work can purchase “The Fairy Rose in America” at bookstores everywhere, or online at the Apple iTunes store, Amazon, Google Play or Barnes & Noble.

Gillian Scott's New Book 'CJ's Mystical Adventure' is a Captivating Tale of a Little Boy's Magical Adventures During His Visit to His Grandmother
Fulton Books - Jul 16, 2020