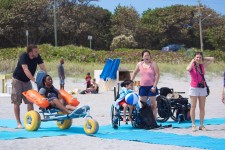 Boca Raton, FL, March 14, 2017 (Newswire.com) - ​The Boating & Beach Bash for People with Disabilities, sponsored by the American Disabilities Foundation, Inc. (ADF), is the largest, free, fun day in America for children and adults with special needs.  The 9th annual Bash will be held Saturday, March 18, 2017 from 10 a.m. to 3 p.m. at Spanish River Park, 3001 North Ocean Blvd. in Boca Raton, Florida.  Upwards of 5,000 guests are expected to attend, supported by 400 volunteers.

The Boca Raton YMCA Drowning Prevention team will take those who need assistance into the ocean by transferring them into specially adapted floating lounge chairs. For many this will be their first ever dip in the sea. Mobility Mats will cover the sand making the beach accessible to all.  Fred Astaire Studios of Downtown Boca Raton will teach line dancing to everyone, even those in wheelchairs, while yoga and meditation professionals will teach their respective arts at the Mind, Body & Spirit Pavilion in a quiet corner of the park.

Broadway luminary Andrea McArdle, the original star of Annie and the youngest performer ever to be nominated for a Tony Award as Best Lead Actress in a Musical, will perform her signature song from Annie, “Tomorrow”. Andrea has also starred in many Broadway musicals including Beauty and the Beast, Starlight Express, Les Misérables and Irving Berlin's classic, Annie Get Your Gun. McArdle’s appearance is being sponsored by community philanthropist Marleen Forkas.

More than 20 yachts including President George H.W. Bush’s personal speedboat, will provide rides on the Intracoastal to guests, their families and caregivers. Twenty costumed action heroes will entertain the crowd, courtesy of Marilynn Wick and Costume World. Additional offerings include: a complimentary BBQ lunch; a Resource Zone with 40+ exhibitors and dozens of games and attractions designed to engage people with physical and/or intellectual challenges.  There will even be a wheelchair accessible mini-train that carries 26 passengers tooting its way through the park. Everyone is invited to take a ride.

Popular South Florida recording artist Chloe Dolandis will perform the National Anthem during opening ceremonies. Rising local rock star Mason Pace, 15, and Thalia Plasencio, 16, from Orlando will lead children from the Miracle League of Palm Beach County in singing “We Are the World”.  Many other performers are scheduled to entertain.

Throughout the day, deaf magicians and professional balloon artists will work their magic while the Boca Raton Children’s Museum will be in charge of the always popular Kid’s Fun Zone. They will be assisted by professional clowns and mimes. Ronald McDonald will appear at noon with giveaways for the children.

Office Depot Foundation has donated 2,000 backpacks filled with goodies for participants at the event.  McDonald’s, Starbucks and Einstein Bagels will provide breakfast for early morning volunteers and kite flyers will do aerial demonstrations from the beach.  Pepsico is donating soft drinks and chips.  Junior Navy ROTC Cadets from Boca Raton Community High School will volunteer at the event, along with many other groups and individuals from throughout the community.  In addition, disability leaders from LA, New York, Chicago, New Jersey, Washington, DC and Atlanta are flying in to lend their support for the day.

“The Boating and Beach Bash has evolved immensely over the years,” said Jay Van Vechten, Executive Director. “The event has helped thousands with special needs. Guests not only engage in fun activities, they also learn about health and wellness initiatives that can dramatically improve the quality of their lives throughout the year.”

The health and wellness component of the Boating and Beach Bash will be led by the organization’s medical director and supported on site by South Florida doctors, nurses, nutritionists, physical therapists and pharmacists from area hospitals, medical schools and the Christine E. Lynn College of Nursing.

Personally, knowing what it’s like to live with a disability is what prompted Boca Raton resident Jay Van Vechten and his wife Lowell to launch the event nine years ago. In 2001, Van Vechten was critically injured in a fall. He has been living with challenging disabilities ever since. After a 40-year career in marketing communications in New York City, he is now the volunteer director of the Bash and chairman of the American Disabilities Foundation, Inc., the nonprofit that raises funds throughout the year to support the event.  “Our goal,” he says, “is to have a lasting, positive impact on special needs guests, caregivers and their families.”

For more information on the Boating & Beach Bash for People with Disabilities, contact Jay H. Van Vechten, Executive Director at 561-715-2622 or jay@boatingbeachbash.com.

About The Boating & Beach Bash for People with Disabilities

The Boating & Beach Bash for People with Disabilities is America’s largest, free, fun day for people with special needs, their families and caregivers. It is sponsored by the Harcourt M. & Virginia W. Sylvester Foundation, TD Bank, the Rotary Club Downtown Boca Raton, Caldwell Banker, Schmidt Family Foundation, the E. M. Lynn Foundation/Christine E. Lynn trustee, the Renee and Carl Landegger Family Charitable Trust, Marleen Forkas, the Marine Industries Association of Palm Beach County and countless others.  The Bash reaches out to embrace the estimated 20% of Florida residents who live with physical and/or intellectual challenges, seen or unseen, to honor them and their caregivers with a joy-filled day. For more information, please call 561-715-2622 or visit www.boatingbeachbash.com .  Donations can either be made on line via a link to PayPal on the Bash website, or by sending a check to the American Disabilities Foundation, PO Box 99, Boca Raton, FL 33429