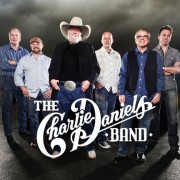 The Charlie Daniels Band has won six Broadcast Music Incorporated Awards over the years for songs such as “Devil Went Down to Georgia” and “In America.” Charlie Daniels was inducted into the Grand Ole Opry and won the Career Achievement Award from the Country Music DJ and Radio Hall of Fame in 2008, after 50 years of playing music.

"Glad to be getting back to Dakota country to pick for the bikers, gonna be a large time at Whitewood Campgrounds on August 3rd."

“Glad to be getting back to Dakota country to pick for the bikers, gonna be a large time at Whitewood Campgrounds on August 3rd."-Charlie Daniels

Whitewood Campground and Event Center was named the official campground for the 75th anniversary of the Sturgis Motorcycle Rally. Formerly the Boneyard in Whitewood, the event center has emerged as the destination to be before, during and after the rally. In its first year of operating, the staff has managed to sign top performing artists to play concerts, and other shows that will take place on the premises.

Along with The Charlie Daniels Band, other top shows include The Marshall Tucker Band, Sawyer Brown, three different motorcycle shows, an Indian heritage Brule show, and many more. The grounds, which will be open before, during and after the rally, have events scheduled for rally-goers of all ages throughout the July 30th to August 8th 2015 period that it is open.

Entry for all of the sites events is free to those who stay at the campground. Additionally, tickets will become available and sold through our website; www.whitewoodcampground.com.

“A home run for us! The Sturgis Rally brings people from all over the nation together. What better way to celebrate this event than to have Charlie ‘Take Back the U.S.A’!” – Kristen Voll, Marketing Director