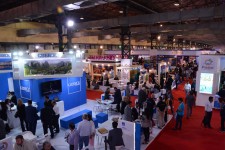 Mumbai, India, February 28, 2017 (Newswire.com) - ​​​​Exhibitors from a record number of 60 countries showcased their destinations at OTM 2017 from February 21-23 at the Bombay Convention & Exhibition Centre. This was by far the largest number of countries participating in any trade show in the country. OTM is organised by Fairfest Media Ltd every year in the largest travel market in India – Mumbai.

UNWTO estimates the number of Indian outbound travellers will grow to approximately 50 million in 2020, contributing $28 billion in expenditure.

Over 10,000 travel trade visitors attended the show in addition to more than 500 buyers from travel trade and corporate sectors who had qualified for special hosting privileges. International buyers from countries like Kuwait, New Zealand, Philippines, Russia and Thailand were also extended similar hosting hospitality.

The Tourism Minister of Greece, Elena Kountoura graced the show with her presence on second day. H.E. Panos Kalogeropoulos, Ambassador of Greece to India and the Tourism Minister took a tour of the show and interacted with various other participants. This was the first time that Greece Tourism participated at OTM 2017 with a large delegation including private sector operators.

The UAE Ministry of Economy organised a national Visit UAE pavilion for the second year in a row, featuring various tourism departments and agencies from the UAE. The delegation was led by H.E. Mohammed K Al Mheiri who informed that the UAE has broadened its presence to include the various government bodies responsible for tourism in all the emirates as well as private sector representatives involved in tourism.

Premium Partner Country of OTM 2017, Turkish Ministry of Culture and Tourism has been participating at OTM for the last seven years with a large number of tour operators. Gülara Alkaçır, Culture & Tourism Officer was extremely satisfied with the event turnout and expects many more tourists from India.

Besides showcasing their myriad tourism attractions, Indonesia Tourism presented an array of cultural offerings during the show. Representatives from Indonesia’s travel and tourism industry under the umbrella of The Ministry of Tourism, Republic of Indonesia discussed their India-specific tourism promotion plans during OTM 2017.

Mumbai is the largest source market for leisure and MICE travel in India. It accounts for some 60% of the outbound travel market in India, considering it is the most popular gateway for the entire West and South India. OTM provides the right platform for national and international tourism boards and private operators to tap this market in the most comprehensive and cost-effective way.

A brand-new addition at OTM 2017 was the co-located BLTM- Business & Luxury Travel Mart, where qualified hosted buyers met the sellers by appointments.

Indian citizens whether travelling abroad or within the country are much coveted and one of the fastest growing markets for leisure as well as business travel segments.

UNWTO estimates the number of Indian outbound travellers will grow to approximately 50 million in 2020, contributing $28 billion in expenditure.

The two Buyer-Seller Speed Networking sessions were a huge hit, designed to facilitate onsite meeting appointments with the buyers to visit the sellers. Visit UAE Lounge was made available for the speed networking sessions.

In another first, the MICE Club was launched at OTM, with an objective to facilitate networking and education opportunities among the community of buyers and sellers from Business Travel and MICE segments.

Globally, travel trade fairs are considered important annual opportunities for face-to-face meetings and networking among buyers and sellers. Traditionally, visitors at these fairs walk the show and meet the sellers of their interest. The advent of online technologies has not left this field untouched either. Increasingly, the buyers and sellers pre-schedule appointments online for meetings at the show.

OTM 2017 had deployed a state-of-the-art online meeting diary system provided by EventsAir based in Australia. It is an advanced system that facilitated matchmaking and appointments between the Buyers and Sellers, and received over 5000 meeting requests prior to the show.

In addition to buying and selling opportunities on the show floor, exhibitors from various countries and states also made colourful cultural presentations. There was an equally interesting line up of workshops and presentations conducted on the sidelines of the mart.

Featuring destinations through films has been a traditionally successful strategy for many destinations. Mumbai being one of the biggest hubs of film production in the world, OTM partnered with The Film and TV Producers Guild of India and Globe Hoppers to organise “Shoot-at-Site”, an exclusive workshop on the opening day of OTM focused on promoting tourism through films shoots, facilitating ease-of-doing business, and making film-shooting friendly policies by the government. The workshop was attended by international and state tourism boards and leading film production companies, and was also supported by the Motion Pictures Association of America - India office, and Ernst & Young.

Destination Weddings is one of the fastest growing segments in tourism. A workshop on ‘Destination Indian Weddings’ was curated with the help of Globe Hoppers. Some of the leading Wedding Planners from Mumbai and Delhi attended the session along with the tourism boards.

Travel Blogger Speed-Networking Session was conducted during the sidelines of OTM providing a chance to meet top 45 travel bloggers from the country and build on their prominent role in the travel marketing ecosystem.

Fairfest was the first mover in India in the space of travel marts. It was established in 1989. Its OTM is now India’s largest travel trade show on the basis of countries represented, as well as the number of sellers and buyers.

Sanjiv Agarwal, Chairman & CEO, Fairfest Media Ltd (organiser of OTM), said, “We are excited about the record number of 60 countries participating in OTM 2017, which is the largest ever in any trade show in India. We have seen growth and consolidation of our lead as the largest travel fair in every other parameter including area of exhibition halls rented, number of sellers and buyers. It also shows resilience of travel market despite slowdowns.”

OTM 2018 will be held from January 23-25 at the Bombay Exhibition & Convention Centre.

OTM is organised by Fairfest Media Ltd, also the organisers of TTF and BLTM branded travel shows. It is India’s oldest and the largest travel trade show network for over 25 years, spanning 10 cities. Fairfest Media also publishes of the most widely distributed print and web editions of the B2B journal Travel News Digest (TND). It also organises Municipalika, an only of its kind annual event focused on urban solutions.

Fairfest Media is the leading travel media company in India. Since 1989, it offers those seeking to participate in trade events the best possible platform for doing business in one of the fastest growing markets in the world.