Over 1,000 GOP Officials and Voters Join the Effort 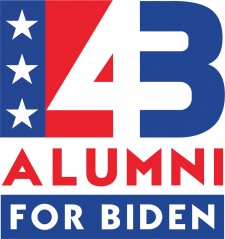 WASHINGTON, July 9, 2020 (Newswire.com) - In the first week since the launch of 43 Alumni for Biden (43AlumniforJoeBiden.com), the organization of former George W. Bush Presidential Administration officials and supporters has garnered over 1,000 members for the grassroots mission to elect Joe Biden as the 46th President of the United States.

“We are humbled and honored by the overwhelming amount of positive support that we received after our launch,” said Karen Kirksey, PAC Director for 43 Alumni for Biden. “The response exceeded our expectations and confirmed that thousands of others are ready to join our effort in putting partisanship aside to restore decency to the White House by electing Joe Biden as the next president.”

Hundreds of new supporters were also contributors to the PAC. As this is a grassroots, all-volunteer effort, the organization has not solicited large-dollar contributions or paid for fundraising services. 43 Alumni for Biden is humbled by the support and will publish names of those who are ready to publicly declare their support for Joe Biden over the coming weeks.

In less than a week, nearly 5,000 Facebook users and 12,000 Twitter followers have been added to spread the message to restore honor and dignity to the White House. The PAC debuted its first video, “It’s Time,” via YouTube featuring the organizing committee leaders of 43 Alumni for Biden. Like many Republicans and most Americans, the organization is concerned about the future of the nation and asks others to join; it is time to right the ship.

MSNBC: ‘Trump is a threat to our nation’: Hundreds of ex-staffers under George W. Bush endorse Biden

Next week, 43 Alumni for Joe Biden will launch the first of several planned virtual town halls to give an update and guidance to volunteers who have signed up through the 43 Alumni for Biden volunteer portal on the PAC’s website. 43 Alumni for Biden organizers are identifying team captains for every swing state to grow the effort in parts of the country that will be crucial in securing victory in November.

About 43 Alumni for Biden

43 Alumni for Biden was formed and organized by a group of volunteers and former members of the 43rd Administration who are investing their time, expertise, and financial resources to make a positive impact in this historic campaign. We welcome the participation and support from family, friends, colleagues and others who believe in our mission to set aside partisanship and elect Joe Biden as the 46th President of the United States.

43 Alumni for Biden is a registered Political Action Committee formed to support and elect Joe Biden as the next President of the United States. Principles matter more than politics. That’s why we, a group of alumni who have served Republican legislators, governors and presidents, are choosing country over party this November.

We worked for W. We support Joe.