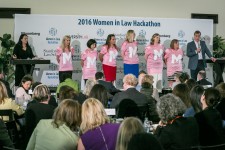 San Francisco, California, June 8, 2017 (Newswire.com) - Diversity Lab announced today that it is partnering with 30 of the country’s leading law firms to pilot the Mansfield Rule. Named after Arabella Mansfield, the first woman admitted to the practice of law in the United States, the Mansfield Rule measures whether law firms have affirmatively considered women and attorneys of color — at least 30 percent of the candidate pool — for leadership and governance roles, equity partner promotions, and lateral positions. The Mansfield Rule was one of the winning ideas from the 2016 Women in Law Hackathon hosted by Diversity Lab in collaboration with Bloomberg Law and Stanford Law School.

The Mansfield Rule was inspired by the NFL’s Rooney Rule, which was created by the late Dan Rooney in 2003 and is now supported by his son, Art Rooney II, President of the Pittsburgh Steelers. The Rooney Rule requires every NFL team to interview at least one minority candidate for head coach vacancies. In the years following its implementation, the number of minorities hired to fill head coach roles doubled. New research, which controlled for other factors that may have contributed to this positive outcome, shows that a diverse candidate is about 20 percent more likely to fill an NFL head coaching vacancy during the Rooney era than before the rule was introduced.

“The Rooney Rule was revolutionary. We now benefit from standing on the shoulders of giants with the Mansfield Rule,” said Caren Ulrich Stacy, CEO of Diversity Lab. “Leveraging lessons learned from the NFL and recent research that shows it is important to interview more than one diverse candidate, we are incredibly well positioned to diversify the top ranks of the legal profession.”

Some of the trailblazing law firms piloting the Mansfield Rule this year include:

Buchanan Ingersoll & Rooney — which has a direct connection to the Rooney Rule through its named partner Art Rooney II, President of the Pittsburgh Steelers — is also piloting the Mansfield Rule. “My father would be proud to know that we are working together as a community to transition the Rooney Rule into the legal profession. He was a true believer in diversity and collaboration, so this is the perfect way to honor his legacy,” Art Rooney II said. “I am thrilled to support and take part in such a large and meaningful effort — with so many prestigious law firms — to diversify the legal profession at the highest levels.”

“Our adoption of the Mansfield Rule ensures that we're following through on our commitment to diversity and thinking broadly whenever new leadership positions come available at all levels across the firm,” said Roger Meltzer, Global Co-Chairman, and Co-Chairman of the Americas, DLA Piper LLP (US). “We're glad to pilot this initiative, which will benefit not only our firm but the legal industry as a whole.”

Law firms that successfully pilot the Mansfield Rule over the next year will be designated “Mansfield Certified” and have the opportunity to send their recently promoted diverse partners to a two-day Client Forum in late 2018 to build relationships with and learn from influential in-house counsel.

“We believe diversity and inclusion help make us a more innovative and competitive company, and the same is true for our suppliers and outside counsel. The Mansfield Rule Client Forum is an innovative way for us to recognize law firms that are trying something new to further boost diversity in their top ranks,” said Ivan Fong, Senior Vice President, Legal Affairs & General Counsel of 3M.

“We believe that diversity delivers better results,” said Julie Gruber, Executive Vice President and Global General Counsel of Gap Inc. “We’ve worked for years to help drive meaningful diversity at our preferred law firm providers, and supporting the Mansfield Rule Client Forum is an important next step in this work.”